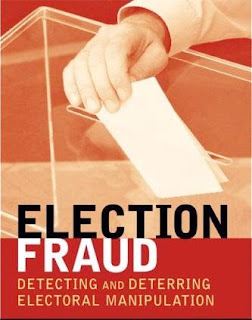 AT IT AGAIN
From the New Bern Sun Journal:
A Craven County voter says he had a near miss at the polls on Thursday when an electronic voting machine completed his straight-party ticket for the opposite of what he intended.
Sam Laughinghouse of New Bern said he pushed the button to vote Republican in all races, but the voting machine screen displayed a ballot with all Democrats checked. He cleared the screen and tried again with the same result, he said. Then he asked for and received help from election staff.
“They pushed it twice and the same thing happened,” Laughinghouse said. “That was four times in a row. The fifth time they pushed it and the Republicans came up and I voted.”
M. Ray Wood, Craven County Board of elections chairman, issued a written statement saying that the elections board is aware of isolated issues and that in each case the voter was able to cast his or her ballot as desired.
Chuck Tyson, chairman of Craven County GOP, remains skeptical. He has been communicating with Wood about the issue and was invited to a meeting Wednesday with state elections officials. There were no further details about that meeting.
“Something is not right here,” Tyson told the Sun Journal. He said he “got two or three calls” from people describing the same problem while they were voting.
“I’ll be matter of fact, I didn’t find that press release satisfactory,” Tyson said, referring to Wood’s written statement.
Tyson reported other problems as well, including long lines waiting for just two voting machines in Havelock, and machines reporting 250 ballots cast where 400 voters had signed in to vote.
Laughinghouse cast his ballot at the county administration building at about 2:30 p.m., he said. After voting, he located a Republican worker on site and asked to speak with her about his voting machine issue. A man interrupted, he said, directing Laughinghouse to talk with him instead. That man said the machine likely needed to be calibrated, Laughinghouse said, and set about the method to do so.
“Each morning every voting unit is calibrated as per manufacturer instructions by trained election rovers,” Wood’s statement said. “These individuals are also working throughout the county each day to assist one-stop officials with any issues that arise during the course of voting.”
Laughinghouse advises voters to carefully check their ballots before confirming to ensure that the machine is logging each vote as intended.
“If you’re in a hurry, you may just push the button and not notice it,” he said.
He has become suspicious of voter fraud because of news reports he has heard. He would prefer voting machines to display an error message when they need to be calibrated, as opposed to completing ballots for the opposite party, he said.
“I’m all for our country and we know there has been voter fraud before and it continues even today,” Laughinghouse said. “So you get suspicious when something like this happens.”
The elections board also encourages voters to check their ballots carefully and to report any problems to poll staff before confirming the electronic ballot.
“It is our desire to provide the citizens of Craven County with the most honest and fair election possible,” Wood’s statement said. “With that in mind and because we seek to maintain the privacy of all voters whenever possible, we ask any voter, while in the act of voting, notify an election official immediately should they experience any difficulties in casting their ballot.”
Wood was unavailable to expand on his written comments on Friday afternoon, as he was in a conference, an elections office employee said. He did not return a phone message seeking additional comment as of press time.
Tyson said he’d like it if Craven County would scrap its voting machines.
“They never work, they’re late reporting, they screw up, they ain’t worth a damn and we ought to go back to paper ballots,” he said.
Posted by Unknown at 8:25 PM

Email ThisBlogThis!Share to TwitterShare to FacebookShare to Pinterest
Labels: US Election, Voting Fraud

When the 'hanging chads' didn't work for Democrats to 'steal' an election an cheat Americans out of their choice, these criminals came up with a computer generated ballot that can be programed for fraud.

Who could have possibly forseen this happening? (Please note: My hand is raised)

Either this goes the way polls are showing, or it's bought and cheated away from the American people.
And you know what comes after that...

Your party of morons are about to take over the House of Representatives, your party destroyed ACORN, your party is known for their voter fraud, Yet you still MUST report on this issue for titillation purposes I guess. OH WAIT, President Obama and his dear wife Michelle have rigged ALL the voting booths in ALL the US of A!! Arm yourselves wingnuts!!!

Mark, the acorn (Sue) doesn't fall far from the tree!

No Sue the Obama's didn't rig all the all the voting booth. Get a grip. You libs always go off the deep end. Did you know that the far left union SEIU fix those machines? Now doesn't it seem a little more logical that this kind of thing is happening? Or are you so far up the Democratic parties ass that you can't see reality? Do liberals run ads in Window Licking Mag. for you people? Take a deep breath Sue and play scratch and sniff with your lead paint walls.

Sue, Acorn destroyed itself (even though they are splintered in to several, new name operations, now)
I report on this issue because the FREAKEN left wing media DOESN'T report this kind of stuff. So, if they don't do what they are paid to do, us blogger volunteers HAVE too. It's for your (and the nations) benefit, too.

And my party is known for fraud?
Are you referring to the 2000 election?
Here, let me fill you in on a WELL known secret.
Florida, by their LAW, required that all recounts be finalized and submitted to the SOS within 30 days after the election. The Federal judge in Florida extended that.
Guess what, judges can NOT change the law. Only interpret, uphold or strike down.
That’s what the US Supreme court ruled, based on the constitution.
So they didn’t get their recount done within the allotted time frame.

Your just upset that the nation, within a short 2 year period, have come back to the right.
Did you REALLY THINK the American people were going to let Obama, Pelosi and Reid socialize the nation???

Chris, I fully intend to continue to report ANY and ALL apparent fraud with this election.
Didn't I say I had a bad feeling about this election, like something was not going to go right? :)
One thing I think David and you will enjoy….
My Boss, a registered Dem, voted early this time around (yesterday to be precise) and voted straight republican ticket. His excuse "I am done with the Democrats."
NICE!

I've been hearing a lot of "Democreats" in my area saying the same thing. I have many Democrat friends and I can't find one that is planing on voting Tues. I'm going to watch the polls in my district for a few hrs. on Tues. They warned me of all the scams that the Democrats are trying to pull.

Glad to hear it, Chris. You're a true Patriot. Our founders would be proud of your efforts!