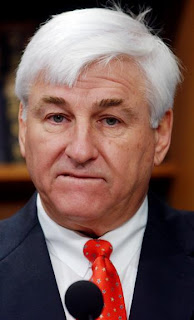 As reported in Human Events:


The son of Rep. Allen Boyd (D.-Fla.) is in prison for smuggling illegal aliens across the Mexican border, calling into question Boyd’s commitment to securing borders and voting on immigration legislation in the House.
The congressman’s son, John Boyd, is currently in federal prison after pleading guilty to the felony charge of conspiracy to transport and harbor illegal aliens for profit. Boyd charged the four illegal aliens $3,000 each—$12,000 total—“to be smuggled into the United States and transported to their final destination.”
According to the Bureau of Prisons, John Boyd is in the Federal Correction Institution, a medium security prison in Yazoo City, Miss. He is serving a 30-month sentence. His projected release date is April 10, 2011.

Speaking of Boyd's father, Congressman Allen Boyd, Steve Camarota of the Center for Immigration Studies, said that, “given that he has a weak record on enforcement and his son is explicitly an alien smuggler and serving time for that, it is reasonable to wonder about his commitment to securing our borders and enforcing our laws.”
Its no wonder illegals have a safe haven in some US cities and their numbers are growing.
They are helping them get in (and stay in).
Posted by Unknown at 11:27 PM

It just keeps getting better and better.

Also, this is like shooting fish in a barrel. I mean come on, do they think they are above the laws?

,,,,Also, especially with the 'new media' meaning you, myself and sooo many others do they believe news of this sort will not get out?

Mark, yes these liberal politician do think they are above the law, they are the 'elite', or so they think that they are.

Christopher, yes these liberal politicians do think it won't get out, as they 'control' the media, so the media ignores anything that would put a negative lite on the liberals.

Yep, AP and it will be up to everyone to put career politicians in their place, the unemployment line.
And thank god for Blogs like our, Christopher, Chris, RightKilk, etc, etc for doing what the MSM won't, report it.