I have not posted much on here lately, because it seems that it's the same old BS continuing to flow out of Washington DC.
However, today's event in DC, at the Navy Ship Yard, and the tragedy from it, warrants me to write another post.

Came across this video with regards to the shooting, today. Not all that unusual to see videos popup on a terrible loss of life of this magnitude. Just like what happened at Sandy Hook.

Many conspiracy theories came out with the Sandy Hook story. And I took them with a grain of salt.

This one, though, needs explaining.


Now, I just don't take some guys video on You Tube as absolute.
Nope. No way!

So I went fishing and sure enough, what as been presented in the video, is true. Without question.
Here are my screen capture of these webpages. 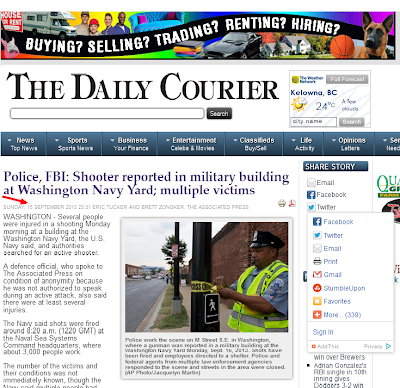 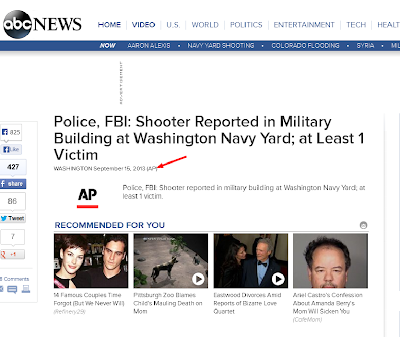 
If it happened once, OK it could be a glitch.

But really, NOT TWICE!

Benghazi Stand Down- Did Valerie Jarrett Give Those Orders

Pretty stunning headline, don't you think?
Could it be that the stand down orders to the US North Africa Commend to head to Benghazi Compound to try and defend Chris Stevens and the other 3 Americans came from the Presidents adviser?

Interesting article, to say the least, from Conservative Report.

Confidential sources close to Conservative Report have confirmed that Valerie Jarrett was the key decision-maker for the administration, the night of the Benghazi terrorist attack on 9/11/2012.
The chronology of the evening of 9/11 are as follows.

At approximately 5 PM Washington time, reports came in through secure-channels that Special Mission Benghazi was under attack. Secretary of Defense, Leon Panetta and Chairman of the Joint Chiefs of Staff, General Martin Dempsey summoned the President,and briefed him on the crisis, face to face.
Subsequent to that brief meeting, President Obama proceeded to the White House to dine in his living quarters.

After supper, Barack Obama had a telephone conference scheduled with Israeli Prime Minister Benjamin Netanyahu. Senior Advisor to the President, Valerie Jarrett was present for that conference, which was held due to problems the President was having with the perception of him snubbing Netanyahu in previous, formal encounters.

The telephone call between Obama and Netanyahu carried on for a full two-hours, creating the appearance of respect between the two world leaders.
As that meeting drew to a close, Ms. Jarrett, who is also the Assistant to the President for Public Engagement and Intergovernmental Affairs, went from the living quarters to the White House Situation Room, where the attack in Benghazi was being monitored by Dempsey, Panetta and other top-ranking officials.

A critical question that needed to be answered, and the sole military-order that could have launched offensive-actions, neutralizing the Ansar al Sharia terrorists attacks on the Mission (the purpose of which is detailed here) and its subsequent attacks on the adjacent CIA Annex, was the issuance of “Cross Border Authority”, an order that can only be issued by the Commander in Chief, himself.
READ MORE HERE

This wouldn't be the only time Jarrett has stuck her claw in to Presidential decision making. The UBL raid, on 3 different occasions, were nixed by this adviser of Iranian heritage.
Of course, she alone could not give the orders. Some communication had to come from the Commander -n- Chief!

Warning From Patriots, to Patriots

This from the Oath Keepers.  It bares a warning to be vigilant on what you receive, or anyone you 'think' you know who might send you a communication via email.

This a warning to all of our members, readers, supporters, and to the general liberty movement.
Please be extremely careful with email, and do not open any attachments from anyone who you don't know, or from any suspicious email, such as tormail.  And even if it seems to be from someone you know, take the time to read the email address carefully, to see if it is from a Tormail account, or other anonymous email service.  It could be someone impersonating someone you know, to trick you into opening files with child-porn on them.
No one here at Oath Keepers uses tormail or any other anonymous email service, so if you see an email purporting to be from Oath Keepers, or from anyone in leadership at Oath Keepers, from such an email service,

do not open it.

There have been a string of anonymous attacks on liberty activists, all attempting to trick people into opening email attachments containing child-porn.   We know of at least four such attempts within the past few weeks.

Well, a few days later it happened again, to two other liberty activists we know.   They have chosen, for the time being, to not go public about it, in the hopes that the FBI will have a better chance of catching the perp.  All of us have reported these incidents to the FBI, through attorney Sue Basko.
Sue has written a very well done description of what happened, what we did to report it, and some important advice on how you can keep from being victimized by whoever is doing this.   Here is an excerpt of that tutorial.  Please take her advice to heart, and be very careful online.
Stewart Rhodes