Dave Johnson is a small business man in Missouri who is just as outraged, as I am, at this "New Government" intrusion not only in to his personal and business life, but in to all Americans lives. People who are seeing this counties prosperity evaporating each and everyday since the Dems have taken total control of our nation are afraid of what is coming.
But SOME are fighting back, such as Mr. Johnson is. Fighting back, even if it is in words. We all need to fight back, regardless of what is going on in your lives right now, those things will eventually go away. THIS intrusion by the Government will last much, much longer.
Dave is the solo proprietor of "The Outsider", a landscaping and designing company serving the greater St Louis metro area.

Here is Daves input to American Patriots-Defender of Prosperity, which makes Dave truly an American Patriot.
We hope he will return to APDP for more insight.
I strongly encourage anyone and everyone who wants America to be AMERICA again to submit their input.
Thanks Dave.

The Obama Administration is so smart, they are just so right on target with their programs, their minds are so sharp with the understanding of economics and priming the economy for recovery... how could we ever have existed without a complete Democratic party controlling the U.S. political power before now?

The real cost to tax payers is:

C) The actual numbers recently stated for 'jobs created and/or saved'....was over stated, actual numbers are 5,000 jobs less! Most of the jobs 'saved' were teaching jobs (aka; government jobs).

D) Unemployment continues to rise and corporations have found ways to improve productivity with less people, so when the economy does improve, many of those who lost their jobs will not be called back.

E) Democratic Socialists want to dismantle the U.S. 'free market' system so that U.S. citizens will rely on the government for everything. With the free market system dismantled who will pay the taxes for all the entitlements for citizens of the U.S. ?

In addition, the administration has already modified Medicare for those on the program. Basically, premiums have gone up, co-pays have risen, medicine will cost more, deductibles have gone up. How can a person retire or pay for these programs?

And Medicare, Social Security and the U.S. Postal Service are near Bankruptcy, if not already there.

The States can't make ends meet and at least one state (liberal California) offers IOU's in lieu of payment (they must have got that idea from the movie 'Dumb and Dumber').

Now the DEMS want to control health care with a public option. How can anybody who is not at least totally brain dead support this?
Dave
Posted by Unknown at 2:40 PM No comments:

CHESTER, Pa...James Krapf, a Chester City firefighter is taking heat after he refused to take the American flag off of his locker.
The firefighter was trying to go back to work Friday night after being suspended without pay Thursday for refusing to take the flag sticker off his locker
Krapf said he's patriotic and many American flags hang around the firehouse.
He said he was told displaying the sticker on the outside of the locker is a violation of department policy. Personal items can be posted inside the lockers.
...Since when is the American flag a "personal item"? It's a symbol of pride, of national symbol of support, a "PUBLIC" symbal of patriotism.
Krapf said "I shouldn't have to remove the flag of the country I believe in. I love my country. "I love my job. I love helping people. I've been doing this 11 years in the City of Chester, so this is something I love to do."
Krapf said he hoped to meet with the fire commissioner and the mayor to resolve the issue, though he still wants to be able to display an American flag.

AND as you should!!! You're a hero of American sprit and pride. Not much of that these days in America since we have the utmost socialist in "our Whitehouse" who, day after day, is shredding the declaration of independence of these United States and Europeanizing our nation.

It's people like firemen Krapf who deserve our support. Who are telling the Government at ALL levels, WE ARE THE PEOPLE! And that YOU are the servants TO the PEOPLE!

Stand tall Firemen Krapf. American Patriots have got your back!
Posted by Unknown at 11:26 PM No comments:

Show Me State shows up Obama

On I-70 in Blue Springs MO there's a message for Obama that is loud, clear and BIG.
The sign features the hammer and sickle, an insinuates that Obama will jeopardize the first and second amendments to the Constitution. 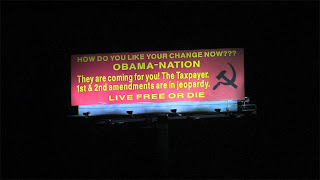 The billboard owned by Bill Cody, a metro area small business owner of a metal fabrication business, says he is against the policies coming out of the White House. And he calls the Federal Stimulus Package a waste and is equally upset over the bailout of the Big 3 Auto Makers. (This blogger agrees)
Cody also says he did it "to vent." To exercise his FIRST amendment rights to free speech. "We voted for change and this is the change we got."

Great job Mr. Cody, way to push back and to tell it like it is.
We all need freedom from Obama, the sooner the better!!!
Posted by Unknown at 7:08 PM No comments: