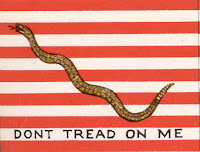 We, the people of the United States of America, live in the greatest country ever conceived. We enjoy freedoms and more opportunities for self-determination like no other on planet Earth. People from all over the globe, who wish to make a better life for themselves elsewhere, choose the United States over ANY other nation. They wish to rejoice in freedom they've never had before.

It is the utmost importance that each and every citizen needs to be reminded of how our forefathers were able to ensure these freedoms we enjoy, and the documents which made them possible.

Unfortunately, some Americans take our freedoms for granted and use those freedoms to make changes that our forefather brought upon this nation. Those Americans do not understand the effort and sacrifice which was required to obtain these freedoms, and don't understand that the changes they so desire will one day come to haunt even THEIR daily lives. All for the ignorance of social change.

It is as important today, if not MORE important, to fight for and honor the achievements of our founding fathers. Without their steadfast dedication to their principles and convictions, NONE OF US would have the freedoms we enjoy today.

During trying economic times, some wavered on our nation's principles. But trying times should be a signal us to a greater calling and hold freedom ever more endearing to our hearts.

We as a people, as a nation and as a bastion of freedom will not stand for a small minority of Americans to besmirch our constitution or violating its content.

More than ever we need "True at Heart Americans" to remember what made our country great...and conduct ourselves accordingly.

The Tea Party is a conservative movement that is growing from its sprouts 8 short months ago and has been given a shot of Viagra.

And is now more popular than the two parties currently holding power in Washington, according to a major new poll.

A new NBC/Wall Street Journal poll released Wednesday say 41 percent of likely voters now have a favorable opinion of the Tea Party. That compares to a 35 percent favorable rating for Democrats and 28 percent for the GOP.

The more the Obama administration takes America to the left, the larger the Tea Party grows on the right.

This is an astonishing movement. A movement based on the foundation of what was once a GOP base.

They have begun to walked away from the GOP in record numbers because of one simple fact (well there are lots of facts, but...)

Americans that now see The Tea Party as the party of choice are more then likely staunch GOP'ers who have gotten fed up with the loss of vision by the Republican party and how the Republican party have given some left talking points a consideration of 'their flexible agenda'.

That won't hold water with most Americans and the results of this poll suggest voter antipathy toward both major parties is more profound than first thought.

It also tells us that the left-wing bloggers and talk hosts who have consistently trashed The Tea Party since it's inception with an obscene “tea bagger” reference are out of step with the American people at best and despiteful to say the least.

As I see it, when you stoop to harsh name calling, there is an underlying panic from the left that this movement is more of a tsunamis of resentment towards not only the left, but moderates of the right.

MSNBC Morning Joe host Joe Scarborough said “This is stunning to me just because it shows how angry Americans are – the Tea Party movement is more popular than both major parties. The parties are dying.”
Posted by Unknown at 11:23 PM No comments: