I'll just let the picture do the talking! 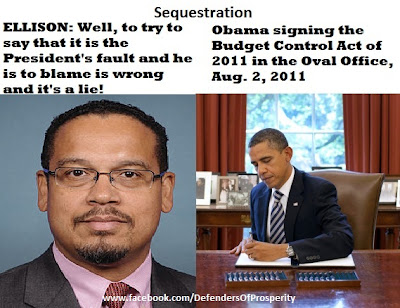 Enough said!
Posted by Unknown at 7:35 PM No comments:


Last night on the Sean Hannity show, Congressman Ellison said that the lead up video to the interview that Sean did, was a "breach of every journalistic ethics" and "Yellow Journalism" he has ever heard of.

Problem with that statement is, outside of Fox News, and a few others, there IS NO journalistic ethics in play in America anymore. And the American people know it. Maybe Congressmen Ellison should 'get in touch' with what journalism is really like in American today.

The fun begins at the 3:05 mark of the video. But to get the full effect of what Hannity put together in the video, I would recommend watching from the beginning.

Another problem with Ellison rant is, Sean let the video montage speak for itself.... In the Presidents OWN words.

Sean did mention that Obama has take a lot of time, on the road, to campaign against the Presidents own idea of sequestration and that he truly is "Staying on script".

Get a clue, Congressmen!
Posted by Unknown at 4:47 PM No comments:

Ex-secret service agent Don Bongino gave a stirring speech at a 2nd Amendment rally last month and what a speech it was.

The right to Arms and a right to free speech is not given to you by an elected official and NO ONE can take your constitutional rights away from you!!!
If you're not volunteering, you're not making calls, you're not registered to vote or do not vote, YOU are the problem with America.

Push Back At Gun Control, Growing

Push back at the Federal Government for bringing the notion that gun control is the answer to our domestic violence problem, is getting MAJOR push back.
Not only from ordinary citizens, but even to the point that other states and county's are getting in the "Not going to enforce gun control laws, if they are deemed unconstitutional" fray.

Here are a number of Sheriffs who are saying "Fat Chance"

The most outrageous texted poll I have ever seem.
78% of MSNBC viewers agree. The President should kill Americans. 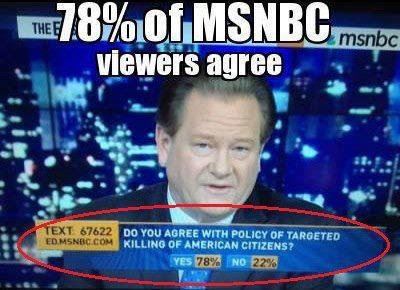 Some of my followers still don't agree that we need to be ready to take on these people.
The left is now at it's peak, since the election, and are ready to take this country down.
My prediction?
Before the end of Obama's term!
I'm ready for these traders.

Posted by Unknown at 8:23 PM No comments:

There has been many reports of conservatives on Facebook being blocked or booted. Their accounts suspended or downright removed from Facebook over the past couple of months.

The Facebook account on Chicks on the Right was brought down for a few days because it was being reported as hateful, or what not.

I know a relative who's account was suspended because he was reported to Facebook as harassing someone, just for debating a known marxist, on the Facebook page Opposing View.
He did this with respectfulness, because thats how he rolls.

Now my opinion is the leftest pukes on Facebook have been going around reporting all these Conservative pages and accounts to rid Facebook of their opposing viewpoint.

My suspicion is that Facebook is run by liberal sympathizers too, and that they don't even review these complaints. That once the person, or page is reported, Facebook just pulls the plug if it represents a view other than liberal.

And you know what, my suspicions are RIGHT.
So yesterday I thought I would test this out.
I stumbled across a Facebook page setup to recall Sheriff Joe Arpaio called Respect Arizona, Recall Sheriff Joe.

On the page, I reviewed a post from someone who was upset that there is a recall petition going around to recall Sheriff Joe.

"Why don't we recall the Presidential election  considering it was fraudulently STOLEN anyways... This site is a pathetic joke" the poster wrote.
For which a reply by liberal hacktifest Joesph B replied
"You're an old stupid cockroach. Plan on packing your bags SHITBAG"

Now it was Joesph  B response of 'shitbag' I reported to Facebook.

The response back from Facebook that I got, was "Thank you for your report. Joseph B******* removed this comment before we reviewed your report." (website grab below)

But the problem is, Joseph B never did remove his comment that I reported (See website grab below)

So there for, Facebook doesn't even review the comments from the complaints.
OR they agree and let it stand.

The conservative alternative to Facebook as reported on Fox News has become a raving success over the last 24-48 hours. With tens of thousands of new subscribers since its announcement, it is a great place to hang with like mind people.

But with the media attention surrounding this launch, comes the despicable leftest hacks who have signed up and then proceed to use vile language to make it appear that they were coming from the Tea Party people. Words that I will not repeat here.

Along with these vile attacks, also, comes the anonymous bots who have crashed the TPC servers with thousands of DOS attacks.
This from Conservative radio host Tom Trento, founder of this website on the  DOS:


Tea Party Community – ATTACKED JUST BEFORE OUR LIVE BROADCAST!
Posted on February 3, 2013.
Earlier this morning (February 2nd, 2013), Ken Crow (TPC-Co-founder), appeared on the Fox and Friends show announcing the launch of our new website — the FB alternative for conservatives.
As anticipated, the our community experienced a large influx of new members and site traffic. Along with all the new members came hundreds of trolls who sought to disrupt our new rapidly growing community.
Our great team of moderators had their hands full handling over 2,000 reports in just a few short hours. With this much media exposure, we’re bound to be a target of our detractors.”
Tim Selaty Jr. (Co-Founder of TPC) stated;
Just 35 minutes before the scheduled live broadcast of our national launch, the Tea Party Community website experienced a large DOS (Denial of Service) attack. “http://en.wikipedia.org/wiki/Denial-of-service_attack”
According to our logs, the attacks came from all around the country including Pakistan, Afghanistan, France, Germany, Russia, and even from the United States. The attack was from a “BotNet”. http://en.wikipedia.org/wiki/Botnet
We ask all of our dedicated Patriots members to hang in there and not lose heart as The Tea Party Community isn’t going away. We’re here to stay.”
Here is the message sent to us from our server provider about the attack:
“Dear Tim:
We have discovered that one of your IP is under DOS attack
Server:
Total Attack Packets Per Second (PPS): 450,000
Your IP is currently the target of a large Denial of Service attack, which leaves us no option but to null route your IP address. The incoming DoS attack was negatively affecting our other customers and our network stability. We have mitigated this attack with a null route (all traffic destined to this IP is dropped), and will be leaving it in place for the next 24 hours. If you would like to remove the null route sooner, simply respond to this ticket and we will remove it and check to see if the attack has subsided. Please note that if the null route is removed early and the attack returns, then another null route will need to be placed.
We are attempting to gather additional details regarding this DOS attack and if successful, we will send a follow up summary report. We apologize for any inconveniences, but we must protect the integrity of our network for all our clients. Please update this ticket if you have any questions.
Thank you and kind regards,
PEER 1 Hosting/Serverbeach Network Operations Center (NOC)”
- TPC Staff


Tom, we are still here with you, support this effort and website.
To the leftest hacks out there with your Proxy server attacks, you'll NEVER silence us!
Posted by Unknown at 10:57 AM No comments: