From Michael Harris of Breitbart.com. And I must say, well said, spot on. In total agreement, here!

Look at the crowd, and ASK YOURSELF, WHY IS THE FOCUS ON THIS ONE BLACK LADY? 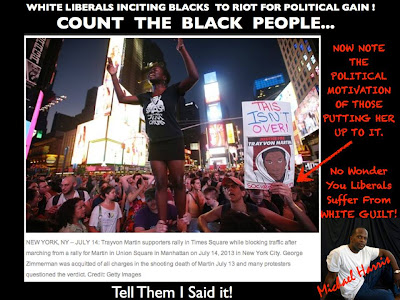 They want riots and White liberals are happy to help is get started. They do this all the time. Just like Occupy Wall Street, for example, this is well documented.


First, these liberals feed us lies to get us emotionally charged up! They have done that for the past year and ½ in this case. They told us lie, after lie, after lie.

Then master manipulating race baiting DEMOCRATS, like Sharpton, Jackson, unite with NAACP (The National Association for the Advancement of Liberal* Colored People) give their gullible BLACK followers the ok by pouring fuel on the emotional fire.

I watched in total disgust as WHITE LIBERALS in the media took to the sky and put their helicopter spotlight on BLACK folks Saturday night like we are a bunch of circus animals and expected us to act up.

We did not take the cue. THANK GOD!

So these WHITE GODLESS LIBERALS are here to embolden , inspire, and incite BLACK FOLK to take to the street in protest! All this to promote their agenda. I , for one am sick of it.

They do this, with the help of certain BLACK liberals that call themselves "reverends". These so called Black leaders know full well that angry BLACK FOLK, a segment of whom are common street thugs who are eager to commit violent acts, and will not behave peacefully...ESPECIALLY when they are totally pissed off.

If another life is destroyed because of this low life thug wannabe, Trayvon Martin, and his lying parents, (who won't come clean and tell us the truth about their sons drug use, burglary, and violent disposition) it will be because self hating WHITE LIBERAL DEMOCRATS in the media and in the streets inflamed the emotions of already angry, misinformed, and dare I say RACIST... BLACK FOLKS!!

At that point, they become more guilty. So I have one for you White liberals who think you are doing us a favor. STOP!

IF this photo is not enough, watch CNN's Candy Crowley do her thang' on national TV! They NEED YOU PISSED OFF! 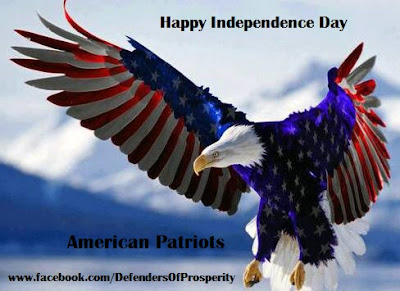 On this day, back in 2009 I started this blog.
237 years ago, my ancestors helped start our country.
The difference of what they started and one that I started 4 years ago, is the nation, and is much different back then... 237 years ago and 4 years ago.

I for one have become very educated on what they started, and why.
And I STILL want it.

I will never waiver, nor falter, in my quest to restore what they started.

I have not posted much here, because I have been working behind the scenes to undermined liberal/progressives, and their attempt to destroy this nation, the way it was intended to function.
It's a war that needs to be won.... for the sake of our posterity.

Again, I will never waiver, nor falter, in my quest to restore this republic.

By Any Means Necessary!

Email ThisBlogThis!Share to TwitterShare to FacebookShare to Pinterest
Labels: 2013, 4th of July, Republic, restore the republic

There is a petition being circulated, particularly around social media, to recall Marco Rubio.
But before signing it, I'd give you a word of caution. KNOW who is sponsoring this petition.

First, the petition here, states that:


Marco Rubio in his own words previously while serving in the state legislature; during his campaign for office and his recent rhetoric on TV, Talk Radio, commercials, emails and surveys sent to his constituents stating that the border must be secured first then path to citizenship. The senator now has changed his promise to suit what he decides is in his best interest and not honor his own commitment to his campaign, voters and supporters thereby disenfranchising them.

Had the Senator expressed his true beliefs on illegal immigration over his term in the state legislature and during his campaign it is doubtful that he would have acquired the nomination to run as the republican candidate for Senator from Florida and most assuredly the election results would be in doubt for his favor.
Due to his own words and actions Senator Marco Rubio has nullified the votes cast for him by disenfranchising voters with glib and false rhetoric corrupting the good faith and will of the voters whose recourse now is to recall the Senator and force him to reveal the factual representation of himself and allow the voters to now judge him based on his true beliefs, values not on false and misleading campaign rhetroic statements.

First and foremost, 'the boarder must secured first then path to citizenship' is exactly what is in the bill that just recently just passed the Senate.
The bill only grants a work permits to those here illegals, then the boarder must be secured, by measures spelled out in the bill. And after the measure are in full force and effect and operating the way the bill states, is when the illegal is then given the opportunity to apply for permanent status.

Which states:
“Thank you for taking action through Care2 to protect America’s middle class and to keep our country moving forward. The DCCC is committed to supporting Democrats across the country because the success of President Obama’s agenda depends on a strong Democratic majority.”

Those wishing to get Rubio recalled and take away his seat need to understand who is behind this undertaking. And must know, you are being hoodwinked in the process.
Posted by Unknown at 7:33 AM No comments:

Regardless of How You Feel About Snowden...

Regardless of how you feel about Mr. Snowden, he is right here.
Right to hammer on Obama, for what we've been saying the last four and a half years, now. Especially the second half of this statement

Edward Snowden released this statement via WIKILEAKS:
One week ago I left Hong Kong after it became clear that my freedom and safety were under threat for revealing the truth. My continued liberty has been owed to the efforts of friends new and old, family, and others who I have never met and probably never will. I trusted them with my life and they returned that trust with a faith in me for which I will always be thankful.

On Thursday, President Obama declared before the world that he would not permit any diplomatic "wheeling and dealing" over my case. Yet now it is being reported that after promising not to do so, the President ordered his Vice President to pressure the leaders of nations from which I have requested protection to deny my asylum petitions.

This kind of deception from a world leader is not justice, and neither is the extralegal penalty of exile. These are the old, bad tools of political aggression. Their purpose is to frighten, not me, but those who would come after me.

For decades the United States of America have been one of the strongest defenders of the human right to seek asylum. Sadly, this right, laid out and voted for by the U.S. in Article 14 of the Universal Declaration of Human Rights, is now being rejected by the current government of my country. The Obama administration has now adopted the strategy of using citizenship as a weapon. Although I am convicted of nothing, it has unilaterally revoked my passport, leaving me a stateless person. Without any judicial order, the administration now seeks to stop me exercising a basic right. A right that belongs to everybody. The right to seek asylum.

I am unbowed in my convictions and impressed at the efforts taken by so many.