Obama's So Full of Himself 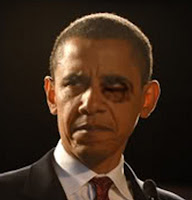 The LA Times today quoted Barack Obama as saying the following.
A Republican majority in Congress would mean "hand-to-hand combat" on Capitol Hill for the next two years, threatening policies Democrats have enacted to stabilize the economy, President Obama warned Wednesday.
What stabilization, tomorrow you will see 10.1 % unemployment (predicted by Gallop), foreclosures are (once again) threw the roof. Money is not flowing through the economic system and the market has gone flat.
Or is this a subliminal message for a call to arms in ‘hand-to-hand combat’, if the right takes back congress, by the left…?
Speaking on Michael Baisden's syndicated radio show, Obama also made a direct appeal to African Americans about the importance of the November vote, even though he's not on the ballot himself.
"If we turn out in strong numbers, then we will do fine. If we do not, if we are depressed (under your administration WE ARE already) and decide, well, you know, Barack's not running right now, so I'm just going to stay home, then I'm going to have my hands full up here on Capitol Hill."
This guy is so full of HIMSELF.
Is he saying that Black people voted for him, based on the color of his skin?
Could be.
However ‘I’ give them more credit than that. I think they thought this was going to be about:
- The most transparent Government you have ever seen
- End income tax for seniors making less than $50,000

- Tougher rules against revolving door for lobbyists and former officials

- Allow bankruptcy judges to modify terms of a home mortgage

He already has his hands full. Full of the BS that the American people do not want.
-‘Unemployment above 8%’
-Over reaching, over barring healthcare that will cost them more, giving the Federal government total control over it and “FORCE” the American people to purchase HealthCare Insurance.
-Sit on the sidelines on the NY Mosque.
-Attack Americans with in the Tea Party
-Attack a news operation.
-Apologizes to Muslims for the actions of the United States to defend our nation against the radicals of the Islam religion.
-Files a lawsuit against a State for trying to protect its citizens and ignoring their plea for help.
-Report that State to the United Nation Human Rights arm.
Oh I can go on for hours about how much more he has placed in his OWN hands.
---(Gulf, Acorn, Blago, Black Panthers, Debt, wild spending, terrorist attacks, encroachment of our Constitutional liberties, etc, etc, etc…)
Posted by Unknown at 11:24 PM

Any raise in unemployment is unexceptable. We have been doing it the Democratic way for a long enough time without possitive results. And the onlly answer these Progressive buffoons know is to throw more of our money at it.

And if asked how to create jobs... they have NO answer. Sad. Realllly sad!