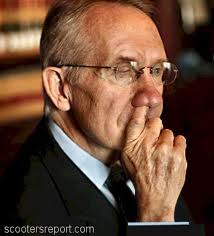 Reid picking his brain
The Las Vegas Review-Journal  has come out and endorsed Sharron Angle as the states new Senator to represent Nevadians for the next 6 years.
This is huge!


Some highlights of the Editorial:
The good senator is 70 years old now, his gait a bit slower, his countenance slightly weary. He's become prone to verbal gaffes and sometimes loses his place while delivering the campaign stemwinder. As he has climbed higher and higher in the Democratic hierarchy, he has veered further and further to the left, becoming politically disconnected from Nevada and its residents.


For the past two years, Sen. Reid has been a water boy for the Obama White House, which is pushing perhaps the most radical liberal agenda in the country's history.


Whether it's shoving the unpopular and hugely expensive ObamaCare down the throats of the American people, or rewarding failing companies with taxpayer bailouts, or ginning up expensive and futile "stimulus" packages larded with pork that push the nation closer and closer to fiscal chaos, Sen. Reid has cheered them all.


Ms. Angle sees government expanding to meddle in virtually every aspect of our lives and she stands up to say enough is enough. She sees red ink from sea to shining sea and she argues for a different direction -- one that forces Washington to live within its means, while keeping taxes at relatively low rates. She sees a crushing debt being foisted on our children and grandchildren and she demands fiscal restraint.
Sharron Angle sees entitlement programs that cannot be sustained without significant reforms and she has the courage to offer solutions. She sees an arrogant federal government that routinely ignores its constitutional boundaries, and she isn't shy about trying to push it back behind the fence.
On the other hand, a vote for Harry Reid is a vote for the status quo in Washington. More of the same big spending. More of the same bloated bureaucracies. More of the same partisan bickering. More of the same inaction on Social Security and Medicare. More of the same class warfare on taxation. More of the same disdain for the job-creating private sector.
The direction of this nation is at stake. This election offers a clear choice.
That's why Nevadans should support Sharron Angle in this pivotal election.
Will this push Angle over the top?
America hopes so!
Posted by Unknown at 7:33 AM

Do you smell that? I think Reid just craped his pants. I can't wait to see the faces of all the liberals when they loose. I would love to be there so I could laugh at all of them to their faces.

This is great news! I heard Mark Levin recite it on his show last night. I was having a rather bad day at work until I heard this.

Chris, would love to see Pelosi AND Reid be shown the door. But if he is voted out and Reps don't take the Senate, who is next in line for the socialist leadership in the Senate, Durbin?

Christopher, for Reid to be booted would make my year. Come on Nov!!!!!!!