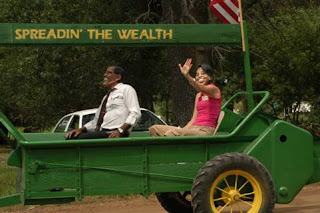 For those who don't know what they are sitting in, it's a Manure (BullShit) spreader. :)
And Joe Biden has obviously ridden in this buggy before, see below...
This letter is being sent out from the DGA and endorsed by Joe Biden.
It does not ask for YOUR vote, but YOUR money.
As with taxes, the Dems don’t mind taking your money, and votes are really secondary with them.
Read on (with subliminal messages):
We learned in 2008 that Democrats win when we have a better agenda for moving this country forward and when we build a strong grassroots operation with a clear message. There is no reason to believe 2010 and 2012 will be any different.
(Or a perceived agenda that was wrongly stated in the 08 campaign as centrist, but an agenda now being seen as Socialist.)
And you know what helps drive strong state grassroots (aka: progressive) programs? Gubernatorial campaigns.

Which is why, if we want strong grassroots support in 2010 and 2012, we must support our Democratic gubernatorial candidates by making a contribution to the DGA.
(Funny, not your vote, but your money makes you supportive)
This is why I am urging you to help the Democratic Governors Association (DGA) meet their crucial fundraising goals by contributing today.
(What about votes? Oh that’s right, he doesn’t care for votes, just cares about lining their pockets with cash)

In order to win in 2010, we need two elements: strong policies that are directed at moving this country forward (in to socialism), not backward (towards Democracy), and strong grassroots (progressivism).
We know, with the right amount of resources (Cash), we can win because Democrats sided with patients instead of the giant insurance companies (but they ensured that insurance companies will have everyone in America as customers by requiring all Americans to have healthcare insurance)during the healthcare reform debate, taxpayers and investors instead of Wall Street firms and huge banks during our fight for financial reform. (Isn’t investors Wall Street? And you invested taxpayer money by bailing out and taking over Wall Street and huge banks, that’s your siding with investors, right? ), and seniors over the big drug companies by closing the 'donut hole' in Medicare Part D. (But then cut Medicare reimbursements to Doctors who now won’t see those seniors, to get their Meds, brilliant…)

These big policy (aka: Big Government) wins for the American people are clear(Most Americans are not clear on what the healthcare law will do), forceful (Yep, forcing Americans to buy commodity. They understand that), and winning policies for 2010. But we're still building that grassroots (aka: Progressive) operation (Union) of support to get our people (Aren’t they the voters people, as elected representatives?)  elected.


Governors around the country are ramping up their preparation for Election Day (By not running on their record). But it's not just about 2010 -- this is about laying the groundwork for 2012 as well. We can't afford to sit this one out, just because President Obama isn't on the ballot! (No it’s not about Obama and Biden, couldn’t be….)

We've got the right policies,(That most American reject) the right strategy (can you say stimulus?...), and great candidates -- we just need your support for the DGA to ensure that we get enough resources on the ground (SEIU/Black Panthers) to make a real impact (By standing outside polling places with clubs) this November. Luckily for us, that is why the DGA exists -- chip in to support their efforts today! (Mo Money)

Joe (The Clueless) Biden
Posted by Unknown at 1:16 PM