The story broke on Gateway Pundit of an incident in Philly where Obama just finished giving a 'Get out and Vote' speech, when a book was thrown at Obama as he walked the stage.

The two pictures(one above, one below) are from  Reuters News. And Reuters is the only one (besides Gateway Pundit) that is reporting this.
The first shot (above) is the actual size of the photo and caption, claimed by Reuters of the incident.
But something looked funny about this picture. So I began to blow it up.
The result is this....
The photo by Reuters has been doctored.
In the largest of the 3 photos you can see a white out line around Obama's head, but more vivid is the book itself. This sure looks like the book is LYING on the branches of the tree.
Wonder how many in the left blogosphere will use this as some kind of proof the Right is getting violent. 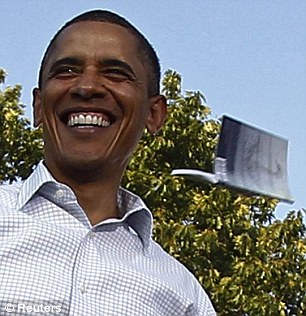 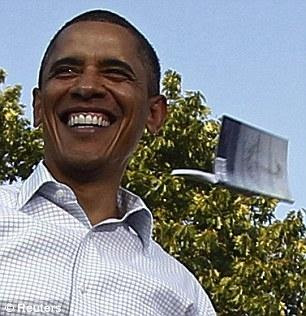 FYI: The incident did take place. Real Clear Politics has this footage here
Posted by Unknown at 11:07 PM

The white line around the President's head can also be explained by an over aggressive use of the unsharp mask filter. It isn't a slam dunk proof that he was Photoshopped into the picture.

Yes, granted, Anon, THAT white line around the head is not a slam dunk.
BUT the book is extremely questionable and if you watch the video (link provided) the President was looking straight ahead when the book sailed by the back of his head. In the photo it shows him looking to his right.
Seems though, I am the only one bringing this out about Reuters picture.

Mark, Yes the picture must have been modified, as I think the book had replaced a shoe! :)

well, as it turns out, if your a FAN of Obama you can throw shit at him and the SS will let you go, (unless your a conservative)!