UN Tries to Dictate to America! 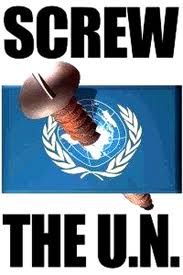 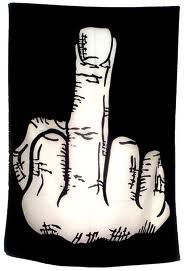 You are no long welcomed.
Posted by Unknown at 8:15 PM

You know, people have long poo-poohed the idea that there are entities actually striving for One World Order and this is but the latest evidence.

It is way beyond high-time the U.N. is not only licked out of the U.S. and we end all association with it, but that we see to it that it is forever disbanded.

There is a reconing coming. And the UN and the socialist within will have their day. We will give them wat they deserve not what they want. We the American people will not take the abuse the UN has given us. And we will not pay for it to boot. As our government moves back to the right they will show their true colors like they did at the One Nation socialist Democratic Party rally. We will see the wolf in sheeps clothing. And we all know what will happen to the wolf?

It's one thing to say you don't like the AZ 1070, but its another for the Feds to sue and file a complaint with the UN humans right folks against one of you own and then have the arm of the UN publicly berate AZ. This not only is fucked in the head, but our enemies are sitting there laughing at this country.
Get the UN out of our country and take the BOS Obama with them.

This just confirms the WEAK LEADERSHIP of the Obama Administration.

The UN is doing this because they can and Obama is powerless to do anything about it...if he really wanted too, but I believe Obama supports a one world rule.

I wonder if I can get a waiver if I don't like it? Maybe I could if I was to join a union!?

If this is not proof to the people that Obama and the UN WANT a one world Government, David, then I don't know what will convince them.

"Obama and the UN WANT a one world government", But Obama was 'elected by Americans' to be president 'of the United States' and Obama took an oath to 'uphold the U.S. Consitution', America is a soverign nation, and Obama was never given a mandate to do anything different concerning those points.

Therefore, Obama's actions to place America into a one world government would be treason.