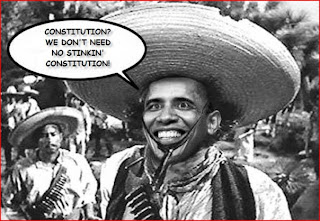 For some very odd reason the Obama administrations has order all US national Guard troops to drawdown completely from ALL US borders states with the exception of Arizona.

Even as violence is escalating from the Mexican drug lords on the US/Mexican boarder.
Why would he do that?

The Obama Administration plans to withdraw National Guard troops from the Texas, New Mexico and California borders by the end February under a new Southwest security plan, even as turmoil in Mexican border cities grows, according to documents obtained by The Washington Examiner.
A letter sent to various members of the Texas Congressional delegation from Texas' Gov. Rick Perry's office says, "In February, 2011, the Texas, New Mexico, and California National Guard forces that were deployed to the border in September, 2010, under President's Obama's Southwest Border Augmentation Plan, will have 30 days to complete a total draw down of forces."
Could it be he is taking the advice from the new deficit commission panel?

Obama's original Southwest border plan would have ended in July, 2011. According to officials familiar with the new initiative the "Administration budgeted only $135 million for the entire deployment."
The funds, which were originally budgeted to those three states, are expected to be reallocated to allow Arizona an additional 100 troops from March through September, 2011 or, "until such time as that money is exhausted," the letter from the governor's office stated.
"This new plan was designed without any input from the States, and without any significant DHS resources being deployed to the border since the beginning of operations," it said.
Posted by Unknown at 7:17 PM

I love reminding the Democrats that voted for Obama of all his left wing failures. Gitmo,the wars,his war,unemployment numbers,no taxes for the middle class...

And here's another fine point. Appears that Obama sent the 500 troops (more had been promised) for purely political reasons — the election. Now that that’s over, time to retract that deal.

Don't forget the Violations of our Consitituional rights with the TSA, which by the way, is now being UNIONIZED!