The Hope & Change That Never Came

For nearly 2 years the American people were ignored.
Their voice cast aside.
Their redress of grievances snubbed
Their wishes and desires dropped in the trash heap behind Capitol Hill.
But today the American people’s voice, wishes and desires will be forced upon the political elite. No more shall the true power of the land be minimized.
We the People will have the last word.
We hope for a change on November 2nd, back in the right direction.

President Obama recently referred to Americans who disagree with him as "our enemies." Mr. President, there's a word for fellow Americans with the audacity to speak up in defense of freedom, the Constitution, and the values of limited government that made our country great. We don't call them "enemies." We call them patriots."

GET OUT AND VOTE.
AND LETS GET IT RIGHT THIS TIME 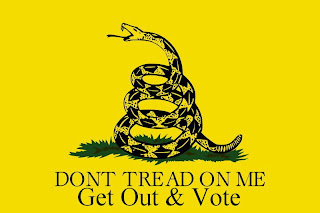 Excellent post! I so wish my Dad was still on this Earth to thoroughly enjoy this day!

Thanks, Christopher. It was my pleasure.
I am sure your dad IS reading this and watching down on us all today, saying the same thing!

Today, we ROAR to Restore Our American Republic!

Thanks for the memories Mark. Now I'm off to the polling station to vote these liberal criminals out of office.
I hope there are some NBPP there to try and stop me, those assholes won't!