Say You Were Wrong, Obama

Back in 2007, then Senator Barack Hussein Obama said this:

“It is absolutely clear that this administration and President Bush continues to not let facts get in the way of his ideology.. They need, now, to aggressively move on the diplomatic front… They should have stopped the saber rattling — should never have started it.”


In 2007 the National Intelligence Estimate (NIE) claimed that Iran has halted it's nuclear weapons program.
BUT now, thanks to the WikiLeaks document exposure, the report by lefties in the NIE was VERY inaccurate. In less than four months after the NIE report was released the Saudi regime was pleading with the US to “cut off the head of the snake” and put an end to Iran’s nuclear weapons program.
Guardian posted the document: 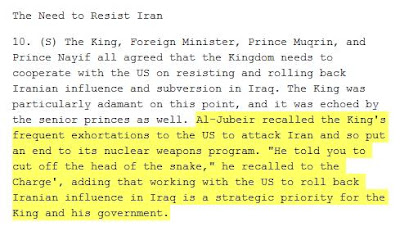 So now to sum up this lack of action by the US because of pressure from the left, we can assess this:
King Abdullah of Saudi Arabia asked America to attack Iran to stop its nuclear programme. And he warns that if Tehran develops a nuclear weapon, then so will the Saudis and other countries in the region.


Iran’s neighboring countries are very concerned of Iran’s nuclear programmed, but the administrations policy will be to pursue stronger sanction as possible and to work with our friendly allies to reduce or abandoned any idea of their own arsenal to protect them from Iran.


Guess Obama will have a new agenda once Iran launches its first nuclear strike.

These leaks are planned. This will turn into 'blame Bush' once again and all Hussein will do is say well now that they have nuclear technology we will have to use diplomacy giving Iran more time to militarize the technology.

And you're probably right, just based on my update of this post, Christopher.
Read just a few hours ago the NK has provided Iran with a number of long range missiles that are capable of caring such a payload. And this administration ignore the threat.

Moscow had better take notice as well, the missiles delivered are capable of reaching it. The irony there is that the missiles are of a Russian design.

Iranians are hard at work copying the design and improving it to make an ICBM capable of hitting us.

All of the leaks I am quite sure have Israel even more so on a hair-trigger as well.

Adding NK's recent murderous actions and the world is in for one helluva ride!