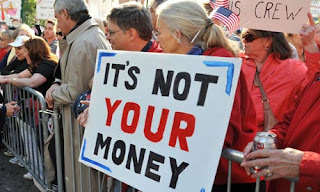 Yep you read it right 40 US millionaires want Obama to raise taxes on anyone earning $1M or more.
There are 7.8M millionaires in the US.
That equates to 5.12820513 × 10-6% of US millionaires that want Obama to raise taxes.
That’s 0.00000005.13%
They call themselves Patriotic Millionaires.
Here is their petition letter to the President.
Mr. President:
We are writing to urge you to stand firm against those who would put politics ahead of their country.
For the fiscal health of our nation and the well-being of our fellow citizens, we ask that you allow tax cuts on incomes over $1,000,000 to expire at the end of this year as scheduled.
We make this request as loyal citizens who now or in the past earned an income of $1,000,000 per year or more.
We have done very well over the last several years. Now, during our nation’s moment of need, we are eager to do our fair share. We don’t need more tax cuts, and we understand that cutting our taxes will increase the deficit and the debt burden carried by other taxpayers. The country needs to meet its financial obligations in a just and responsible way.
Letting tax cuts for incomes over $1,000,000 expire, is an important step in that direction.
However, the group includes many big-time Democratic donors such as Gail Furman, trial lawyer Guy Saperstein and Ben Cohen of Ben & Jerry's ice cream (Wonder what Jerry thinks?)
For the fiscal health of our nation and the well-being of our people…STOP SPENDING.
These millionaires didn’t get rich solely by spending.
If they are so concerned for our fiscal health of our nation, whip out the old W4, there is a line on it that says “Additional amount, if any, you want withheld from each paycheck” and place this figure of $395,000 (39.5% of $1M) on it and "Do your fair share" then.
And don’t speak for the rest of the 99.9999999487% of millionaires.
Posted by Unknown at 9:31 AM

This is just hype. They full well know they make way more than $1 million/year and have many, many loopholes for which to hide from taxes.

What they also know is that a small business owner making $1,000,001.00 in taxable income is the one who will be devastated by this as will job creation.

I really doubt my dad wrote a letter to Obama asking for more taxes to be taken!

Mom and dad are having a tough time making ends meet with their million as it is and they are very very frugal.

Yes, I understand its hype. Something for the left to use as a talking point. A talking point that is DOA. And they sure do know the loopholes to hide it from tax.