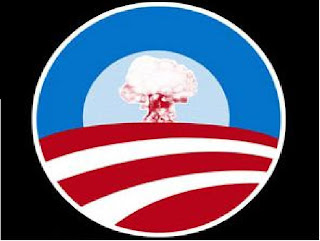 As reported on RealClearPolitics:

Democratic Polling firm Democracy Corps (D) has a new survey out that should send chills up the spines of Democrats.  Like the recent NPR survey, there's really no good news there for Democrats.  Among the findings of the poll of likely voters:
About the only good news for Democrats is that former President Bush is still viewed as being mostly responsible for the state of the economy, though that too has narrowed.   Expect to see his face in a lot of Democratic ads this fall.
Now the last paragraph I have warned you about for several months.
My recommendations:
DO NOT GET CAUGHT UP IN DEBATE WITH THE LEFT ABOUT BUSH.
THIS IS OBAMAS SHOW NOW!
STAY FOCUSED!
Posted by Unknown at 7:53 PM

You have em all enumerated there, Bush never had such cumulatively low numbers at one time like this, and he's not stupid so it's all by design without doubt. Good post Mark!

Thanks Ray, but it's pretty easy to post this stuff, all thanks to the Obama administration giving us bloggers all the material to work with. LOL.
And the left will run this Nov on 'Bush did this and that', so you're right Bush never had these types of numbers and shows America has awaken, so let the left run against Bush, we've got the retort for it.