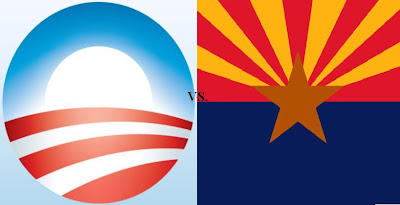 The hearing of suit the Federal government has filed against Arizona began today with opening argument.
Here are some of the back and forth from the Feds and Jan Brewer lawyer with Judge Bolton.


Omar Jadwat, representing the Mexican American Legal Defense and Educational Fund, said Congress never made it a crime for those in this country illegally to seek casual employment.
But Bolton told Jadwat he is making a presumption about what Congress intended.
“Or did they just not deal with it?” she asked.“We know Congress knows how to preempt expressly,”
But Bolton did not spare John Bouma, the attorney for Gov. Jan Brewer, from her inquisitions.
She pointed out that police “arrest” people all the time for minor crimes, issue them a citation and let them go about their business. Bolton said this provision of SB 1070 would appear to require police to hold people for some extra period of time -- one attorney said it can take an average of 88 minutes to get a response from Immigration and Customs Enforcement -- beyond what is necessary to cite and release.
Bouma said lawmakers meant to apply that only to people who actually are taken into custody and “booked” into jail.
“That’s what they should have said then,” Bolton responded. She said it could result in detaining tens of thousands of people “who otherwise could be cited and released.”
The questioning is significant because the judge is weighing each of the provisions in the law to determine if there is sufficient legal reason to bar any or all of them from taking effect as scheduled on July 29.
As part of that determination, the judge needs to make at least a preliminary decision on whether the provisions of the law are constitutional. If she believes some sections are not legal -- and if she determines there the harms to some if the law is allowed to proceed are sufficient -- then she will place the law on “hold” until there can be a full hearing on its legality.
Bolton’s questioning made it clear, though, that she will not invalidate the entire law.
As I predicted. The Feds don't have a case to strike down the entire law, so they are using this as a stall tactic so they can get immigration reform passed and signed.
What do you think? Will the Fed be successful in achieving their goal of placing the law on hold, so Congress can ram through immigration reform to get millions a legal path to....Vote in Nov?
Posted by Unknown at 7:36 PM

This BS lawsuet boils my blood. Our economy is still hemoraging and they are sueing AZ for upholding the federal law. If the court finds that this law is illegal then they better go after all those sancuary cities. But that is how we know that this is a BS lawsuet all about politics. If I was a betting man I'd say the Obama admin and many in Congress are revelutionaries,"fundamentally" destroying our nation so they can "change" it. I hope you have a victory garden to feed your family with when they start to destroy farms and food like they did in the great depression. I'm not saying it will happen but it might and you may want to be prepared for it. The wealthy used to trade their silver for meat in the depression and this is looking like the depression.

I agree, Chris. But the further they pull us in to a socialist society, the more angry Americans get.
Unfortunately I don't have room for a victory garden. So if it comes to that, I'll take it from the left, as they have taken from all of us.
One turn, deserves another.
I am prepared to do WHATEVER IT TAKES to destroy the Democratic socialist monsters, Chris... One way or another. (Damn, feel like Samuel Adams right about now) :)

I feel the same way. As we have seen it only takes a moment for our country to be turned upside down. It's not a bad idea to study and know survival techniques. I'd also learn what plants are edible and learn traping. You would be amazed at how long you could live off the land if you know what is good and bad. It's a dangerous place to be if food becomes scarce. All the people will be thinking like you and trying to take to survive. In those situations only the strong and lucky survive. I'd rather gather the food they left behind and let the population thin itself out the natural way. I never thought I'd use what my grandfathers tought me and what they had to use to survive during their lives. We are only one solar flare away from caos

I am happy to hear you say these things but i thought you were an optimist?

Now do not take me wrong here but you seem to follow Pannebeckers thoughts and he sides with career politicos (RINOS) who are part and parcel to the situation at hand be it state or fed.

This fight we have HAS to be from the dog-catcher up as evident recently in CA.

This shit is systemic throughout BOTH major parties hence the Tea Party.

I understand it is a forum to take on libs, but please challenge him on who he supports. He will not post my comments on that issue and I AM A CONSERVATIVE. That spells volumes as to his agenda.

Mark, thanks for the soap box.

I am not really following Pannebecker much. Use to read his stuff but found it not keeping my attention.
Christopher, can I have my soap box back now. LOL :))

I am an optimist with training in realism. In other words I'm a optomistic realist. Christopher to each his own. We all want the same thing but use different methods to get there. Brian is doing a great job and I see more of what he is doing then most people. None of us are perfect in our methods but we must not be exclusinary with fellow conservstivers or for that matter ex-moderates and ex-liberals willing to "try" a little conservative. I do agree that I don't care for Brians pick for governor as I like the Nerd for Mich. Brain wants to bring in conservative to Mich with baby steps while you want a 100% conservative or nothing at all. You both are right. Brian is a conservstive through and through. Just so you know the TEA Party isn't all conservative or far right. There are Libertarians which are not conservative on social issues within the Tea Party. I would like to keep them in the Tea Party and add them to the Republican party for their limitied government idealogy.

Did you read about who Brian is to this moment supporting?

Sorry dude, but I cannot support such deviant BS.

No I didn't. Thanks Christopher. Do you still like the nerd for governer?