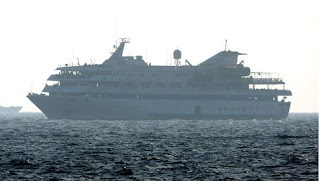 As reported by One Jerusalem


In the wake of the deadly battle at sea against the Gaza Flotilla, Israel has been telling the world that the prime sponsor of the so-called “Gaza Flotilla” is a terrorist linked organization. Many news organizations, (including the New York Times, Reuters, and the British Broadcasting Corporation), are ignoring this charge and continue to refer the so-called victims as peaceful Palestinian advocates.
A week ago, the Republic of Cyprus denied the flotilla any access to its ports. Despite some international criticism, the Cypriot government did not want to be party to a dangerous scheme by a confrontation minded group.The Cypriots clearly did their homework  – something that the news media did not.
A quick search of Internet reveals that Turkish based International Humanitarian Fund (IHH) is embedded with terrorists and their organizations. Like Hamas they provide humanitarian aid but their clients include Al Qaeda, Hamas, etc. Turkish security forces raided the Istanbul office of IHH. IHH activists were arrested, and Turkish security forces found explosives, manuals, and weapons. (For authoritative information on IHH click here.)
According to the French intelligence, the president of IHH (Bulent Yildirim) recruited “Jihad warriors” and transferred firearms, and explosives to Al Qaeda and other Islamic terrorists organizations. IHH has also been fingered for producing documents so Islamic terrorists can travel by air posing as relief workers. And IHH was involved with the terrorist who tried to smuggle 1320 pounds of explosives to be used to blow up Los Angeles International Airport.
This is a partial picture of the forces challenging Israel. These are people who are determined to destroy the Jewish State. These facts are not being broadcast in the many hours of news time being given to the Flotilla story.

Funny how the major news organization conveniently forgot to mention IHH and that their "Organization" has been infiltrated by Terrorist.
The Western Media needs to be called out on this very important fact missing from their reports.
I guess it will be left up to the Bloggers to actually do the reporting of the News.
Posted by Unknown at 11:28 AM

It is funny how they keep forgetting all the pertanent information. What a shame that the media is pushing anti Israel propaganda. I'm sure living in an area with more Jews and Arabs outside their home country we will be having protests. These protests don't always end peacefully.

Terrorists or not (good info by the way) who in their right mind would challenge a naval blockade? And if in contemplating such an idiotic move, just what did they expect to happen?

They say another is on the way,,,forget boarding them,,BLOW THEM OUT OF THE WATER!

Wonder how many in the media wondered when reports came out that the Israeli commandos, when boarding this "humanitarian" flotilla, came under attack by those on board with sticks, knifes and "weapon" fire. Since when does a humanitarian Org carry firearms??