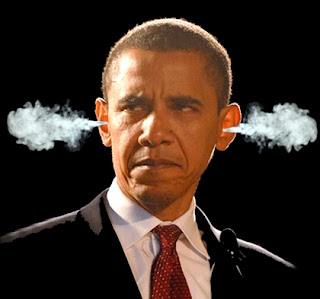 An infuriated U.S. president is hauling his top general in Afghanistan to the White House, job hanging in the balance, to explain "what in the world he was thinking" when he and his aides mocked their commander-in-chief and his team. Well in this blogger opinion he was TELLING THE TRUTH.

Obama pulls his top General out of a theater of war to talk about comments made in a Rolling Stones story just released.

If Obama fires General McChrystal over a few jokes made about the Administration, then Obama has lost it.

This President has no leadership skills and can't keep a think skin.

What a poor excuse for a Commander-n-Chief

After reading General Stanley McChrystal's comment (1) in a Rolling Stone magazine article entitled "The Runaway General," Obama departed from his calm, deliberative style. He wasted little time in ordering him to fly halfway around the world to face the music on Wednesday.

Obama spokesman Robert Gibbs, speaking more bluntly and emphatically than usual at his daily briefing on Tuesday, said "the magnitude and greatness of the mistake here are profound" and repeatedly declined to say McChrystal's job was safe.

Current polling on some news website shows that nearly 92% don't feel firing McChrystal over a rag of a Magazine story is a big issue when we are fighting a war against Islams radicals.

Obama is a truly blunder-n-chief
Posted by Unknown at 10:59 PM

Obama is the one in charge. He picked these people to serve under him. Just like a weak Democrat he will blame everything on someone else. If this guy was running my company i'd throw him out. He never takes responcability for anything.

If he applied to work for me, he wouldn't even had gotten in the door.
He is not even worthy of cleaning the johns.

You're right, never has taken responsibility for anything, which makes him a poor leader.