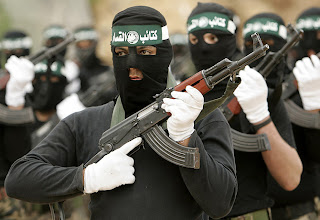 A senior Hamas figure said Friday that official and unofficial US sources have asked the Islamist group to refrain from making any statements regarding contacts with Washington, this following reports that a senior American official is due to arrive in an Arab country in the coming days to relay a telegram from the Obama Administration.
The Hamas figure told the London-based Al-Quds Al-Arabi newspaper that the Americans fear discussing the talks publicly would “rouse the Jewish lobby and other pressure groups in the US and cause them to pressure the administration to suspend all talks with Hamas.”
The Hamas figure, who is close to Ismail Haniyeh, the prime minister of the government in Gaza, added, “This is a sensitive subject. The Americans don’t want anyone to comment on it because this would catch the attention of pressure groups (in the US) and cause problems.”
He said Hamas’ exiled leadership in Damascus is overseeing the contacts behind closed doors.

The State Dept has labeled Hamas as a terrorist organization, but Obama is hold secret meetings with them.
PEOPLE, THIS IS TREASON AT ITS HIGHEST LEVEL!
Posted by Unknown at 7:49 PM