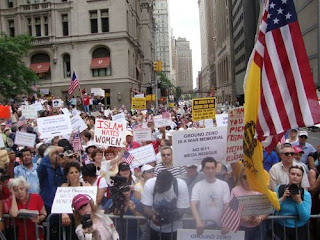 From the streets of New York City. A City that was decimated by the acts of terror on 9/11/2001,  the streets filled with those who will never forgot the horror's of that day. And vow never to allow the religion that spawned the radicalism of that day to build their house of worship upon the memorial grounds upon which so many innocent lives lost.

The opponents of a proposed mosque near Ground Zero are not done protesting yet.
Just hours after Sunday afternoon’s massive demonstration in Zuccotti Park, the anti-mosque organizers said they would continue fighting plans to build a 13-story mosque and community center, called Cordoba House, two blocks north of the World Trade Center site.
“This is just the beginning,” wrote Pamela Geller, executive director of Stop Islamization of America, which organized the protest. Geller wrote on her blog that the planned site of the Cordoba House, the former Burlington Coat Factory building on Park Place, should be landmarked as a “war memorial.” The historic building was heavily damaged on 9/11 when landing gear from one of the jets crashed through the roof.
Geller and others said they would sue the city and federal government to landmark the building.
“We will protest again in September and stage sit-ins in front of the mosque should they try to break ground,” she wrote. “Three thousand good and decent Americans did not die in vain.”
The city Landmarks Preservation Commission considered landmarking the 152-year-old Burlington building back in 1989 but never made a final decision. The commission could hold a hearing as soon as July to either landmark the building or remove it from consideration.

Lets hope SMARTER heads prevail and NEVER allow this Masque to built there.
Its outrageous to even consider it.....

Glad I'm not the only one who thought this was outrageous. Waht in the hell is the matter with these leaders? Years ago they use to tar and feather and run them out of town on a rail. Do these leaders think they are invincible?
How do they get from the office to their house whithout harm...people are pissed off big time!

They are trying to appease the Islamic jihadist.

You're right, Chris. They ARE trying to appease them because they are so spooked by what happen on 9-11 that they rather fight back at people like you, me, Dave, all on the right, who want to fight back at terrorist.
Ever notice how the left will call us warmongers for going after the ones who have killed our fellow Americans. And that we are creating more terrorist by killing terrorist.
How stupid is that? You can't make them faster then we can kill them. LOL

They appease. We get even and bury them, so as not to return another day.

I am just as outraged as you are, Dave. But Bloomberg is afraid of them... He is NO Rudy!

I don't belive this is the place for a masque, Anywhere but 600 feet from where 3200 Americans were slaughtered.

I agree, Bart. It is sacred ground for Americans and many more around the world.

By equating Islam with those horrible thugs that murdered people in downtown NYC, you honor terrorists and the idiots that support them.

William, those thugs that murdered 3000 Americans that day, did so in the name of Islam. We don't honor them, we despise them.

I remember 9-11 like it was yesterday,I remember all of the lights in my home were off and my family and I cried as we watched people jump out of windows because they believed that that was the only way they were going to be able to make it. I remember my mother holding her pillow as she cried and prayed for all those who were stuck in those buildings and for the families they were leaving behind. Every night till this day I pray for them, but not just for them but also for the hundred of thousands of people across seas dying every single day. I pray for the soldiers, for the children being blown up into pieces and left with out parents, and those held captive in Cuba by the United States being brutally tutored by brain washed soldiers with no morals. Everyone hates Al Queda but if they did it, they definitely didn't do it alone. Especially since the United State government were funding them millions before 9-11. Could it be that the taxes of good hard working people was used to blow up the towers and also used to pay Al Queda? I don't mean to disrespect any of the family members nor any of the firemen who helped but I am just saying that the story that the media fed us doesn't add up. Also there is nothing wrong about people thinking for themselves and questioning what happened that day. This is the only way to justify all the lives lost that awful day.