WARNING: Obama to quite decent 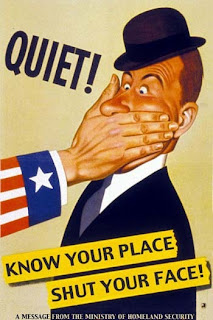 Foreign Ministry reports circulating in the Kremlin on June 1st are warning that an already explosive situation in the United States is about to get a whole lot worse as a new law put forth by President Obama is said capable of seeing up to 500,000 American citizens jailed for the crime of opposing their government.
Sparking the concern of Russian diplomats over the growing totalitarian bent of the Obama government is the planned reintroduction of what these reports call one of the most draconian laws ever introduced in a free society that is titled “The Violent Radicalization and Homegrown Terrorism Prevention Act
First introduced in the US Congress in 2007 by Democratic Representative Jane Harmon, this new law passed the US House of Representatives by a secretive voice vote, but failed to pass the US Senate, after which it was believed dead until this past week when it was embraced by Obama who became the first American President to name his own citizens as a threat to his Nations security.
In what is called the National Security Strategy document, that is required of US Presidents by their Congress, that embraces the dictatorial ideals of the “Violent Radicalization and Homegrown Terrorism Prevention Act”, Obama has ordered his Federal police and intelligence forces to begin targeting Americans opposed to him and his radical socialist polices.
More from EUTimes

Spread the word folks. This is something I do believe Obama would do.
Posted by Unknown at 9:06 PM

This is outright scary. And the libs will call us "chicken little" until it becomes law. America is asleep and we must wake them up.

Hell yeah it's scary and being kept out of the media, OR they're just to focused on the Gulf and Israel.
While we are looking one way, they walk right up behind us.
We all need to watch this, like we did with the Healthcare law.