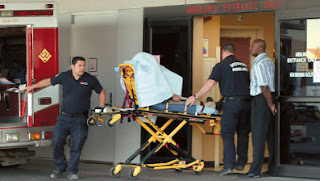 If this doesn't raise the Federal Government illegal immigration flag, I don't know what will.
An Arizona Deputy has been shot and wounded trying to stop illegal immigrants and drugs from getting in to our country.

Pinal County Deputy Louie Puroll was patrolling alone Friday afternoon in a rugged area near Interstate 8, about 50 miles south of Phoenix, when he came upon a band of suspected smugglers, authorities said.
At least one of five suspects opened fire on the 53-year-old lawman, tearing a chunk of skin from just above his left kidney. The officer was found after a frantic hourlong search, Pinal County sheriff's Lt. Tamatha Villar said.
The wound was not serious and Puroll was released Friday night from Casa Grande Regional Medical Center
You can read the whole story on Fox News Website.
Are you listening, Mr President?
Posted by Unknown at 9:57 AM