No News is NOT good News

As first reported yesterday, here on Bonsai on the Right, and now picked up by Gateway Pundit, the Arizona Governor office yesterday received a letter in the mail that had a white powdery substance inside.

The AZ legislature recently pass a strong (and needed) immigration bill the AZ Governor signed in to law. This backs up the US immigration laws already on the books.
There has been many protest recently about the new law, and the protest have been somewhat peaceful, but not all.


So, today I thought I would Google this to see how many in the media have reported this story about the letter received by the AZ Governors office.
This is a snapshot of my results.... 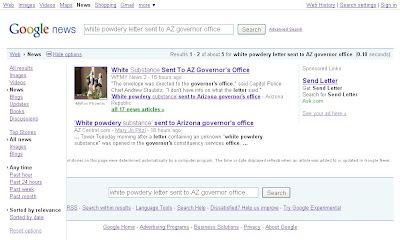 Guess what, none have reported this, except the local news outlets.

Only other 'News' website (on a national level) out there that is reporting on this is Fox Nation.

Pretty sad when something like a possible terrorist attack on a sitting Governors office is not reported.
It's true, the American media is the lamestreammedia
Posted by Unknown at 7:41 AM

Nothing to see here! Move Along!

Propaganda Minister Gibbs and the state-run media will tell you what's important!

HMMM there's a hint who might have done this. "Move Along" Move Al"on"g. :))
I guess it's true, only the blogasphere does the real reporting in this country.

Par for the course. Media malpractice has grown to pandemic proportions.

Thanks RK. It's pretty sad that this is a dead issue with the media in this country. I mean... dead... on... arrival.