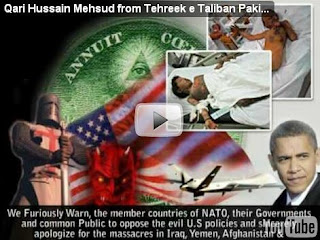 
A top Pakistani Taliban commander took credit for yesterday’s failed car bomb attack in New York City.
Qari Hussain Mehsud, the top bomb maker for the Movement of the Taliban in Pakistan, said he takes “fully responsibility for the recent attack in the USA.” Qari Hussain made the claim on an audiotape accompanied by images that was released on a YouTube website that calls itself the Tehreek-e-Taliban Pakistan News Channel.
The tape has yet to be verified, but US intelligence officials contacted by The Long War Journal believe it is legitimate. The Tehreek-e-Taliban Pakistan News Channel on YouTube was created on April 30. Officials believe it was created to announce the Times Square attack, and Qari Hussain’s statement was pre-recorded.

The video has since been taken down by YouTube.
Posted by Unknown at 10:07 PM

Wow. The funny part is the obama admin. is taking credit for thworting two terrorist attacks. These guys are too lucky and not that good.And I'm getting sick and tired of the media calling us the radical dangerous ones. The left is out of control and they are saying we are the ones. Things are starting to come unravled fast and hope is lost for many Obama supporters.

LOL he takes credit for their F up?? LMAO... he fits the mold, Chris. Obama is a F**k up alright! LOL
Did you by any chance see Bill O'Reilly talking point memo last night. He rips the media for misleading the nation on the Arizona law. I mean slices and dices the MSNBC's of our nation. It was CLASSIC.