Could this be another attempt by terrorist at an attack on American soil? Could be.
But will have to wait and see what the DHS says. Even though they have to many things going on in the Gulf of Mexico with an oil spill. Oil spill???

Wonder what the DHS has to do with an oil spill and why is Janet Napolitano heading down to the Gulf.

Lets see if she makes what almost happened in NYC last night more of a priority then an oil spill. Unless the explosion on the Oil rig was a terrorist attack. 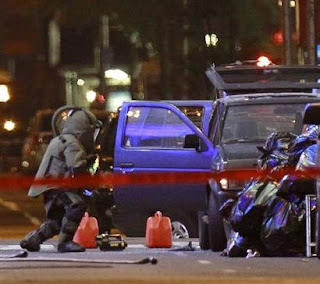 Police found an "amateurish" but potentially powerful bomb that apparently began to detonate but did not explode in a smoking sport utility vehicle in Times Square, authorities said Sunday.
Thousands of tourists were cleared from the streets for 10 hours after two vendors alerted police to the suspicious vehicle, which contained three propane tanks, fireworks, two filled 5-gallon gasoline containers, and two clocks with batteries, electrical wire and other components, Police Commissioner Raymond Kelly said.
"We avoided what could have been a very deadly event," Mayor Michael Bloomberg said. "It certainly could have exploded and had a pretty big fire and a decent amount of explosive impact."
The bomb appeared to be starting to detonate but malfunctioned, top police spokesman Paul Browne said Sunday. Firefighters and witnesses said they heard a popping sound from inside the vehicle.
Bloomberg called the explosive device "amateurish" but potentially deadly, noting: "We are very lucky."
The NYPD bomb squad "has seen sophisticated devices before and they described this one as crude," Browne said. "But it was nevertheless lethal." If detonated properly, it could have created a large fireball and sprayed shrapnel — metal from the propane tanks and car parts — that could have killed pedestrians in the immediate vicinity, Browne said.

The full story is here from AP

We are not safe with Obama, Pelosi, Reid & Co running this country. Seems like history is repeating itself with an Administration more focused on hijacking our economy than keeping us safe.
Posted by Unknown at 11:45 AM