Obama is Inspired... By Alinsky

Obama is inspiring the violence and protest of the new Arizona immigration law, as is the left, because that's all they have left to push back with. Race!
They have nothing left in the arsenal of Saul Alinsky playbook.
There is no justification for this President to misrepresent the AZ law. There no proof of race attack by the right, nor racial profiling, but they will say it over and over again to make themselves believe it, so others will follow. 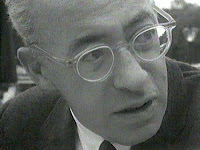 You really need to read Saul Alinsky book "Rules for Radicals", as Obama is following like a fish to a lour, and as Alinsky calls on:
"Organizing to the current generation of young activists, largely drawing upon his own experiences. Any revolutionary change must be preceded by a passive, affirmative, non-challenging attitude toward change among the mass of our young people. They will not continue to be relatively passive and slightly challenging. If we fail to communicate with them, if we don't encourage them to form alliances with us, they will move to the right. Maybe they will anyway, but let's not let it happen by default."

The bold words are exactly what Obama is doing on this and many current issues.

You can adhear Alinsky and Obama and todays current hot bed issues with Alinsky's 11 rules (keep these in mind when debating issues with liberals:


That last bold sentence is directly out of the left playbook for the Nov election. they still plan on using Bush as an attack trigger.
These rules however are NOT one sided, and can be used to bring down a liberal to their knees by reversing the rule. Turn the rule around on them. they have no defense for this.
Happy liberal hunting.
Posted by Unknown at 11:19 PM

Very true. The problem lies with the American people though.

Most if not all of us on the right warned of this but a liitle more than half the voters did not listen and dare say the that the ones that did held their collective nose and did not vote.

They were inamerd that a "Black Man" could speack so eloquently. But now that people are actually listening he doesn't sound so sharp. To add, God in all His wisdom knew that Obama would push America back into a more Chrisatian and conservative America.

I had always thought that elevating this guy to the Presidency from a Jr Senator was like promoting a mailroom clerk to CEO. You just don't do it. My thoughts proved to be correct.