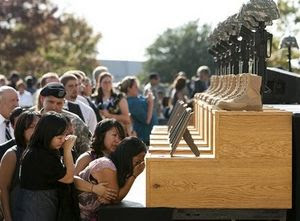 The Obama administration said Tuesday it would provide more information to Congress about the Fort Hood shootings but continued to defy a subpoena request for witness statements and other documents.

What is he hiding?

Days of negotiations wasted and then Pentagon and Justice Department informed a Senate committee that they would not comply with congressional subpoenas to share investigative records from the Nov. 5 shootings at Fort Hood, Tex., which killed 13 people. The agencies said that divulging the material could jeopardize their prosecution of Army Maj. Nidal M. Hasan, the accused gunman. The Pentagon did budge in other areas, however, saying it had agreed to give the Senate Committee on Homeland Security and Governmental Affairs access to Hasan's personnel file, as well as part of an Army report that scrutinized why superiors failed to intervene in Hasan's career as an Army psychiatrist, despite signs of his religious radicalization and shortcomings as a soldier.

There has been very little report on this and I think the American people deserve SOMETHING here.

Leslie Phillips, a spokeswoman for the Senate committee, called the refusal by the Pentagon and the Justice Department to hand over all the requested material "an affront to Congress's constitutional obligation to conduct independent oversight of the executive branch."
OK but Ms Phillips, where were you during the heathcare BS?.....Anyways....

She said the committee, chaired by Sen. Joseph I. Lieberman (I-Conn.), was still deciding whether to pursue the subpoenas in court. The committee has complained that the Obama administration has been stonewalling it for months over its Hasan probe, prompting it to issue the subpoenas April 19.

Pentagon press secretary Geoff Morrell said the Defense Department has tried to cooperate as much as possible with the Senate investigation.

He said that Deputy Defense Secretary William J. Lynn III spoke Friday with Lieberman and Sen. Susan Collins (Maine), the committee's ranking Republican, in an attempt to resolve the dispute but added that he didn't know whether the Obama administration's offer would be enough to satisfy the panel.

"We feel as though we have leaned very far forward," Morrell said. "This is as far as we are prepared to go."

This President, this Commander-n-Chief is the most opaque President this American has ever seen.
Posted by Unknown at 11:19 PM