I have been some what skeptical of the 'Birther' movement. Being that there had to be some sort of deep digs to make sure that anyone running for President is eligible to hold the office. I have been bombarded with numerous stories of why he is not.
I kept telling myself he'll bring forth his full birth certificate and we can be done with it. But this "President" has spent hundreds of thousand of dollar to stop this disclosure. Which now is putting serious questions in my mind on 'what is he hiding?'

What you about to read from Sharon Rondeau of The Post & Email is an eye opening & awakening read, and coming from a Kenyan government official, has now brought me to the point of being a 'Birther'.

The statement, which discussed the concept of “devolution,” or ethnic inclusion, reads:  “If America was living in a situation where they feared ethnicity and did not see itself as a multiparty state or nation, how could a young man born here in Kenya, who is not even a native American, become the President of America?”  The PDF and this statement can be found
here.
News sources, one of which was NPR, reported Obama’s birthplace as Kenya, not Hawaii.  The Kenyan ambassador to the United States also affirmed  that Kenya is Obama’s birthplace, stating that it was “well-known.”  Obama’s wife Michelle identified  Kenya as her husband’s “home country” while addressing a group of gay, lesbian, transgender and bisexuals during the presidential campaign of 2008.

The Kenyan Parliament had previously referred to Obama as a “son of the soil” of Kenya on November 5, 2008, in a meeting convened the day after the 2008 U.S. presidential election.

Is there only a small group of men and women out of a force of 2,000,000 with enough patriotism to stand up and demand that the putative president prove himself?

At this point, the entire burden has been borne by a handful of active duty and retired military including Major Stefan Cook, Lt. Col. Easterling, and Lt. Col. Terrence Lakin, Captain Pamela Barnett, Cmdr. Charles Kerchner and their attorneys who have taken a stand by refusing to take the orders of someone who appears to be usurping the office of the Presidency.

While the courts have refused to hear many of the cases based on technicalities, the case of Kerchner v. Obama & Congress et al, which is on appeal with the Third Circuit Court of Appeals in Newark, NJ, has a hearing on the merits tentatively scheduled for June 29, 2010.
But where is the rest of the military?  What is Admiral Mullen doing, and how is he upholding his oath to the Constitution? 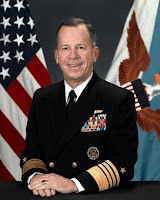 Where are the members of [worlds] finest fighting force?  Why will they not come forward  and demand Obama’s documentation?  Do they really think that “we the people” are going to sit by and watch as our Constitution has been violated in the most egregious fashion by the biggest political heist in U.S. history?  Do the Joint Chiefs sit in their offices in comfortable chairs, collecting handsome paychecks and benefits, while the rest of us  are made to suffer under a usurper, a tyrant, and a foreigner?  Do they not care that they and their subordinates are taking the orders of an imposter, a foreigner, exactly the thing that Alexander Hamilton warned us against?

“He said he was born in Hawaii.”  It has gone beyond, “I didn’t know.”  The evidence that Obama is a foreigner without any claim to the presidency is overwhelming now.
Now it’s time to make the top brass do its job.