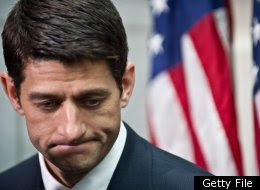 The strongest plan yet to cut our $14T deficit, the Path to Prosperity plan, crafted by Paul Ryan got a resounding NO in the US Senate today, 57-40.

The plan that would cut the deficit by $6T, fix the Medicare debacle and save it from going bankrupt got the no vote, but not so much along party lines.

The RINO's chipped in to make it one of the loudest NO vote in recent history on a budget.
I did, however, expect this to go down, since the Progressives - Socialist - Dems just don't understand the Ryan plan and have been campaigning against it by manipulating the elderly to believe that the GOP was going to hog tie grandma and knock her over a cliff.

Sad that the Democrats took the advantage to spew the out in out lie to American seniors.

The RINO's no vote was not too surprising, except for one.
This list consist of some:

Lisa, I Won't Take No For An Answer, Murkowski

Susan, I want to be Olympia, Collins


Rand Paul was the biggest surprise from all the Republicans. And at this point, I am sure his local Tea Party Patriots are not to happy, either.
Are you curious as I am?
Feel free to call on Senator Paul at his DC Office Phone: 202-224-4343 and get some answers, I know I will.

LOL! Rand Paul voted against it because it doesn't balance the budget until 2030 and he doesn't think we have that long. He has his own plan, which was also voted on, which would balance it in 5 years - without even going after medicare or social security in that time frame although they would need to be reformed to stay in balance. He voted for that. He also reluctantly voted for Tooney's budget which would balance the budget in 2020, although he doesn't like how long it takes. That one also leaves medicare and social security to be dealt with separately.

Ryan voted for TARP, for the Bush stimulus and the prescription expansion of Medicare with its restriction on free market purchase of drugs out of the country, for no child left behind....I have no clue why he is being set up as a conservative now.

Anon, it's the deficit that is the issue and the entitlements as they are now, that continue to balloon the deficit.
Yes Ryan did vote for TARP, like lot of Reps and Dems did. Of course a lot of them as gone now...
Good news here is Obama's budget got an even bigger NO, by a margin of 97-0, yesterday.

It appears that even Bill Clinton agree about the Dems tactics. Bill Clinton and Paul Ryan were caught chatting off stage at an event yesterday at a forum on the national debt held by the Pete Peterson Foundation. During their discussion Bill Clinton basically agreed with Ryan that democrats were playing politics with there “Mediscare” attacks and that something needed to be done to fix Medicare.

I understand Paul's reasoning that we need more, but I disagree with voting no. We have to start somewhere.

I too am disappointed, but what did we expect? We have to have the debate and get everyone on record before real progress happens.

I don't see anything serious happening until after the 2012 elections. If you thin the American people are sheeple, congress is an even flightier herd, easily spooked.

And Murkowski is just a big pork liberal. She got elected in Alaska with traditional dem tactics, doling out millions in goodies to the indigenous tribes in exchange for their votes.

If the Democrats have their way they will bankrupt every entitlement.

Silver, MurCOWski just needs to change her party affiliation. And yes for sure it was no surprise, but Paul??? I just can't figure that one out.

Chris, my take is they want to tank the economy and the federal government as we know it. That is when the panic sets in and people rise up against this Administration, they'll declare marshall law and suspend the constitution, then all sh*t hits the fan. THIS is the same pattern I have seen from the left, time and time again, they don't care how it will destroy the capitalist society, as long as it gets done!

Trestin, if that is the case, Paul needs to understand that it must be taken in baby steps. To much at one time, with 2012 heading our way, could be disastrous for the GOP. You're right, we have to start somewhere before it's too late. (read my reply to Chris).