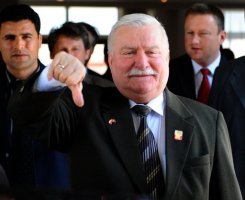 Lech Walesa, the man who sparks the freedom movement back in the 1980's in Poland, against the Soviet empire in a tiny shipyard, that eventually, by determination and love for freedom, went viral throughout the Eastern block nations, understands where Obama is coming from, is my guess.
He remains hush, hush on his reasoning he snubbed the President of the United States, Barack Obama for a meeting that Waleasa tried to set up with him originally.
Looks like Walesa got the message that Obama is not much different from those Lech brought down to their knees back in the 1980's

"It's difficult to tell journalists what you'd like to say to the president of a superpower. This time I won't tell him, I won't meet him, it doesn't suit me," Walesa told Poland's public broadcaster TVP.
Obama is due to arrive in Poland later Friday after the G8 summit in France.
Walesa was originally scheduled to meet Obama Saturday along with other key figures in Poland's post-1989 transition from communism to democracy.
According to sources close to Walesa, he was expecting a personal invitation from Obama, who won the Nobel Peace Prize in 2009 shortly after taking office.
The US president is Friday scheduled to attend a working dinner with more than a dozen presidents of ex-communist states focusing on what lessons their democratic transformation could hold for the Arab Spring.
On Saturday, Obama is due to hold bilateral talks with his Polish counterpart Bronislaw Komorowski and Prime Minister Donald Tusk on the last leg of his European tour which has also covered Ireland and Britain.

I agree with you Mark, Lech is a stand-up man (a real man) that did his country of Poland proud let alone the World and more than deserved the Nobel Peace Prize.

I was very pleased he did not grant Obama an audience with him (yes, I meant to say it that way) as Obama is not fit to even kiss Lechs ass!

(Google is pissing me off BTW)

Eastern Europeans know what socialism is about.

"Obama is not fit to even kiss Lechs ass!" SOOOOOOO true Christopher. I remember those days with Walesa. He was a much better President for Poland then Obama is for the US. (BTW was having issues with Goggle myself a few days ago AND today and yep they are pissing me off too!)

Yes sir, Trestin. Had a boss, from a former job, who was from Poland (accent and all) who voted for Obama in the primaries and I warned him about Obama, that he was just like his former government in Poland. He didn't take it well, but now understands what I was talking about.