Tonight, the President will announce that, and as report on Fox News this day, Osama Bin Laden, the man behind the 9/11 attacks on America is... 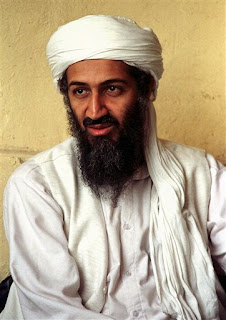 If reports hold true, he was killed on Easter.
How appropriate would that be?
It's been report that one week ago, Americas #1 Enemy was snuffed out and is burning in Hell.
-------------------Update----------------
OBL killed in a fire fight in Pakistan!
I'd have to give credit to Obama and especially to our
MILITARY!
GOOD WORK!!!
God Bless America!!!
--------------------Update 2-------------------
Statement by President Bush.
Earlier this evening, President Obama called to inform me that American forces killed Osama bin Laden, the leader of the al Qaeda network that attacked America on September 11, 2001. I congratulated him and the men and women of our military and intelligence communities who devoted their lives to this mission. They have our everlasting gratitude. This momentous achievement marks a victory for America, for people who seek peace around the world, and for all those who lost loved ones on September 11, 2001. The fight against terror goes on, but tonight America has sent an unmistakable message: No matter how long it takes, justice will be done.


I would remind all, this is not a political victory.
It Is An American Victory!
Never forget that.
Posted by Unknown at 9:54 PM

And adding to that, RK, Our allahu akbar! :)

This is great news. I'm just waiting for the video's of all the "moderate Muslims" dancing in the streets over this news. The left-wing keep telling us they exist in large numbers but I never see them. It seems "moderate Muslims" are like the Easter Bunny.

I want rock solid proof before I celebrate. The body of the jackal would have sufficed in this regard but no, Obama had to bow to the east once again (as reported?) in burying OBL at sea within 24 hours.

It's an old saying but it works here: The President needs to learn that there is no 'I' in TEAM.

It is the incompetent that have to bring praise upon themself for fear that no one else will!

Christopher, I whole heartedly agree. Obama can't be trusted, we need an un-photoshopped piece of evidence. My wife who did vote for him, now despises Obama and wants photographic proof also. I agree!!! :)

AP- Anyone who would say 'Obama did what Bush couldn't do' (IF this is true) is forgetting that neither could Clinton. It's a Bush foreign policy and set goal. If true, Obama policy to get this guy was the same as Bush's... We are still in Iraq, we are still in Afghanistan, in Gitmo, Gitmo detainees will be held at Gitmo and tried by a military tribunal. The Policy has not changed in this manner.

I'd say from here on out, to defeat this ideology, Silver, it would now have to be from the top down!
:)