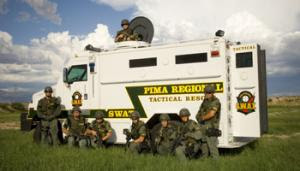 This is the story of two situations here in America. One is of the outright slaughter of a former Marine that served his country with 2 tours of duty in Irag. The other is of handling Muslims who conspire to murder with kid gloves.

First the former Marine. His name is Jose Guerena, living in Pima County in Tucson, AZ.

The Canadian Free Press Reports:
'A Pima County, Arizona SWAT team were serving a narcotics conspiracy warrant at his home earlier this month. Guerena, who had been sleeping just two hours after working his shift at a local mine, was awakened by screams from his wife when she observed an unidentified man with a gun outside of their home. She grabbed her baby and hid in a closet as Guerena grabbed a rifle and proceeded to investigate. He was shot dead inside the sanctity of his own home, in the U.S. and not by some sniper in Iraq. In total, seventy-one rounds were fired at Guerena.'

'To make matters worse - much worse, medical treatment was withheld by the SWAT team, according to his widow and verified by police and medical logs. At this point, it would appear that Guerena was startled awake and thinking he was protecting his family from a possible home invasion, stumbled onto a police raid. He never had a chance.'

'As a result of the lax border security at the hands of DHS Secretary Janet Napolitano, there has been a sharp rise in home invasions in Tucson over the last few years. Of course, one would not know that by the “cocky football spiking” Obama from his recent speech in El Paso, where he mocked and ridiculed anyone who dared to question the state of U.S.-Mexico border insecurity.'
The Stopthedrugwar.org reports:
'According to the initial police account, when SWAT officers broke down the door of Guerena's home, which he shared with his wife and young child, he confronted them and opened fire. "The adult male had a long rifle, opened fire on the SWAT team. The SWAT team returned fire and the male is pronounced deceased. The woman and the child are unharmed," said Pima County Sheriff's Deputy Jason Ogan'.

'Six days later, police admitted that while Guerena, a former Marine, was holding an AR-15 assault rifle, the safety was on and he had not fired it. They also admitted that SWAT officers fired 71 rounds at Guerena in seven seconds. It was also later reported that even though Guerena's wife called 911 as soon as he was shot and that EMTs arrived two minutes later, deputies never allowed them to treat Guerena, citing security concerns. (Recall that in the Jared Loughner mass killing in Tucson earlier this year, EMTs were allowed to treat the wounded in a matter of minutes despite the chaos of that scene.)'

The Sheriff Dept., run by Sheriff Clarence Dupnik, is defending their actions. You may remember Dupnik, he is the same Sheriff that spoke out about free speech during the Gifford shooting which got many in the nation so upset and calling for his resignation. It seems that Dupnik does not respect the right for the sanctity of one's home either.

The other situation, which draws a clear parallel to the Tucson one is of Muslims, a Mosque, and a SWAT team in Florida.

The Canadian Free Press reports:
'Now, consider the raid on a south Florida Mosque at about 6:00 a.m. Saturday, by dozens of heavily armed federal agents. They pounded on the door of the Masjid Jamaat Al-Mumineen mosque in Miami-Dade county, armed with warrants for Muslims who are suspected of a long-running conspiracy to murder, maim and kidnap people overseas in support of the Taliban. As morning prayers were in progress inside the mosque, the armed agents respectfully waited until the prayers ended, and then entered the mosque only after removing their footwear. '

'Additionally, three others named in the indictment are currently at large in Pakistan. They are identified as Ali Rehman (a/k/a Faisal Ali Rehman), Amina Khan (a/k/a Amina Bibi), the daughter of Hafiz Khan, and her son, Alam Zeb, who is also Khan’s grandson.'

Two different SWAT teams: one team bursts in and unloads 71 bullets into a man the other the SWAT team waits a half hour for the service to end and then takes their shoes off to enter.
These stories say many things, but one thing it does say loudly is that the culture in America has changed and is killing us.

Is this the change that everyone had hoped for? I don't think anyone did!
Posted by AdamsPatriot at 4:08 PM

The Florida raid is endogenies of Political correctness having influence with in a law enforcement operation. Which has no business being part of the operations.
The Tucson raid, sounds like trigger happy cops that got overzealous based on the lack of training and the commend structure of the one and only Dupnik.
Nice piece, AP!!!

Unprofessional police like those in Arizona who murdered that vet in his own home need to be charged.

This is the problem with militarizing our police. The problem is compounded when these hero wannabe's are incompetent.

This is sad. The anti-police left-wingers like Obama will eat this up.