Who 'Called the Ball' on Nailing OBL

Thanks to Adams Patriot for this bit of info on a report that Leon Panetta "worked around the president’s “persistent hesitation to act.”
Highlights of the piece are stunning and I will present them here.
The site statement are claimed to have come from a White House insider. Who that is, is uncertain. 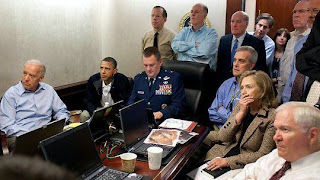 Q: You stated that President Obama was “overruled” by military/intelligence officials regarding the decision to send in military specialists into the Osama Bin Laden compound.  Was that accurate?
A: I was told – in these exact terms, “we overruled him.” (Obama)  I have since followed up and received further details on exactly what that meant, as well as the specifics of how Leon Panetta worked around the president’s “persistent hesitation to act.”  There appears NOT to have been an outright overruling of any specific position by President Obama, simply because there was no specific position from the president to do so.  President Obama was, in this case, as in all others, working as an absentee president.
I was correct in stating there had been a push to invade the compound for several weeks if not months, primarily led by Leon Panetta, Hillary Clinton, Robert Gates, David Petraeus, and Jim Clapper.  The primary opposition to this plan originated from Valerie Jarrett, and it was her opposition that was enough to create uncertainty within President Obama.  Obama would meet with various components of the pro-invasion faction, almost always with Jarrett present, and then often fail to indicate his position.  This situation continued for some time, though the division between Jarrett/Obama and the rest intensified more recently, most notably from Hillary Clinton.  She was livid over the president’s failure to act, and her office began a campaign of anonymous leaks to the media indicating such.Q: What changed the president’s position and enabled the attack against Osama Bin Laden to proceed?A:  Nothing changed with the president’s opinion – he continued to avoid having one.  Every time military and intelligence officials appeared to make progress in forming a position, Jarrett would intervene and the stalling would begin again.  Hillary started the ball really rolling as far as pressuring Obama began, but it was Panetta and Petraeus who ultimately pushed Obama to finally actPanetta indicated to Obama that leaks regarding knowledge of Osama Bin Laden’s location were certain to get out sooner rather than later, and action must be taken by the administration or the public backlash to the president’s inaction would be “…significant to the point of political debilitation.”  It was at that time that Obama stated an on-ground campaign would be far more acceptable to him than a bombing raid.  This was intended as a stalling tactic, and it had originated from Jarrett.  Such a campaign would take both time, and present a far greater risk of failure.  The president had been instructed by Jarrett to inform Mr., Panetta that he would have sole discretion to act against the Osama Bin Laden compound.  Jarrett believed this would further delay Panetta from acting, as the responsibility for failure would then fall almost entirely on him.  What Valerie Jarrett, and the president, did not know is that Leon Panetta had already initiated a program that reported to him –and only him, involving a covert on the ground attack against the compound.The following day, and with Panetta’s permission, Clinton met in private with Bill Daley and urged him to get the president’s full and open approval of the Panetta plan.  Daley agreed such approval would be of great benefit to the action, and instructed Clinton to delay proceeding until he had secured that approval.  Daley contacted Clinton within hours of their meeting indicating Jarrett refused to allow the president to give that approval.  Daley then informed Clinton that he too would fully support Panetta in his actions, even if it meant disclosing the president’s indecision to the American public should that action fail to produce a successful conclusion.  Clinton took that message back to Panetta and the CIA director initiated the 48 hour engagement order.  At this point, the President of the United States was not informed of the engagement order – it did not originate from him, and for several hours after the order had been given and the special ops forces were preparing for action into Pakistan from their position in Afghanistan, Daley successfully kept Obama and Jarrett insulated from that order.I have been told by more than one source that Leon Panetta was directing the operation with both his own CIA operatives, as well as direct contacts with military – both entities were reporting to Panetta only at this point, and not the President of the United States.In my initial communication to you of these events I described what unfolded as a temporary Coup initiated by high ranking intelligence and military officials. I stand by that term.  These figures worked around the uncertainty of President Obama and the repeated resistance of Valerie Jarrett.  If they had not been willing to do so, I am certain Osama Bin Laden would still be alive today.  There will be no punishment to those who acted outside the authority of the president’s office.  The president cannot afford to admit such a fact.  What will be most interesting from here is to now see what becomes of Valerie Jarrett.  One source indicated she is threatening resignation.  I find that unlikely given my strong belief she needs the protection afforded her by the Oval Office and its immense powers to delay and eventually terminate investigations back in Chicago, but we shall see.
This is quite a story to be telling, but one, at first glance I would believe, by the fact that Obama has dithered on many military acts, questioning and reversing, back and forth on military decisions that have been reported he made.
The last two years have also show an incompetent President, leaving up to Congress (a congress of his choosing) to work on important legislation so big that it effects every last American. All the while visiting his buddies in Chicago, hitting the links and the B-Ball courts, vacationing every few weeks, failing to inform Congress of Military action in Libya, etc. To me, again, this President is in over his head and can't handle this job.

I am beginning to question whether or not it happened,,,at all.

I'd have to halfly agree, Christopher. My big question, which not to many people have asked is how can you do a field DNA test and get results that quickly???
As this unfolds more and more, it surely shows Obama is out of touch with this job.

His Presidentcy is and has been a lie.

I find this very credible indeed!

Not surprising. Thank God it all turned out ok anyway.