And the 2nd Amendment is Under Attack Again

As sad as it is, the events in Newtown Connecticut, and the deep sorrow for the lose of life of the children and teachers I feel, I can only say that my profound hopes are that they can recover quickly and my prayers to the survivors and their family go out to them. This American is, and always will be, with them.

Some in our nation, however, right out of the gate, are calling for repeal of the 2nd amendment.
They take a kneejurk reaction to the event, that it was the weapon use, and not the person who got a hold of those weapons, as the reason this took place. 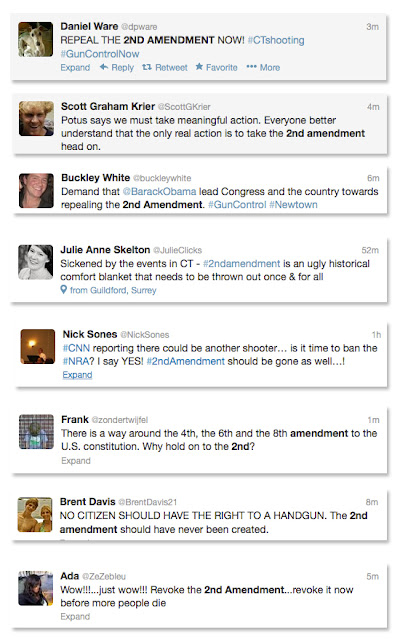 What the left doesn't understand is when our forefathers penned the Constitution, the purpose of the 2nd Amendment was made perfectly clear:

A well regulated Militia, being necessary to the security of a free State, the right of the people to keep and bear Arms, shall not be infringed.

The 2nd Amendment is “necessary to the security of a free State”; it is what helps ensure our freedom from a tyrannous government.
Criminals who are dead set on committing murders will find a way to get a gun regardless of laws or amendments. The real threat is the fact that our own government is armed to the teeth. The 2nd Amendment does not only regard one’s personal self-defense, but it speaks to the broader ability of the people to keep a potentially oppressive, out-of-control government and its standing army in check.

The perpetrator of this crime in Connecticut was not following any gun laws when he shot 28 people that day.
America is based on the 2nd Amendment. Our liberty and the ability to stay free of total government tyranny depends on it.

The hypocrisy in the wake of this shooting is reaching a crescendo. Calling for more senseless violence and murder will not bring these shooting victims back to life, neither will enacting stricter gun laws that shooters obviously do not, and WILL NOT follow when they commit these terrible crimes in the first place anyway.

When you call for more, stiffer regulation on keeping and bearing, then where will it stop?
Controlling knives, in the case of Nichole Simpson. Or duck tape, in the case of Caylee Anthony? Catching my drift? It's the twisted person who should not have access to them.
Not the rest of us who would evoke our 2nd amendment rights on those who will not follow the laws and attack us!!!


I'll leave you with this. 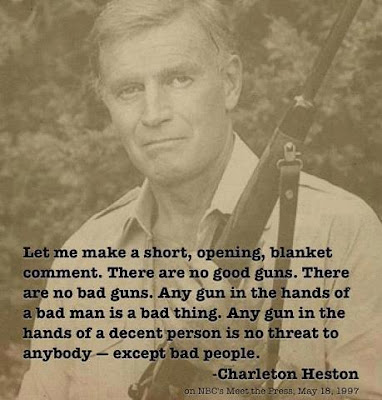 Email ThisBlogThis!Share to TwitterShare to FacebookShare to Pinterest
Labels: 2nd Amendment, being necessary to the security of a free State, Newtown Connecticut, shall not be infringed, the right of the people to keep and bear Arms

Where will it stop? Great question, Mark. And great quote by the great Charleston Heston.
Obama will go as far as he possibly can until only the bad guys have guns; and the government, too.

I saw a lib at another site saying Switzerland has the highest murder rate in Europe because their soldiers take their guns home to keep when they're off active duty. It's a TOTAL LIE but that's what these people will do to get their way; just as they did to get Obama elected.

They sure do spew out the LIES, just to make their point.
I am guessing they do, thinking most of us won't go check out their claim.

A few days ago, in China, a mad man killed a number of children with a knife, but you won't hear the MSM bring out those kind of stories.
Even in a gun free country, you will have people doing whatever they can, to cause mayhem and destruction.
It’s the twisted person who is the problem in our world, not the weapons they use.

Some now have taken Obama speech yesterday at the memorial service to say "I will do whatever I can, with in my power to end this..." as to mean he will issue an executive order to ban and/or confiscate. I am concerned that if it holds true, that would be the spark heard around the world.