Anti- Right to Work, Pro-union thugs attack and destroy Americans for Prosperity tent outside the State of Michigan capital this afternoon, when minutes before the Michigan state House of  Representatives pass the states right to work bill.

This is what I have been warning about for the last 6 months.
Things are going to get very ugly in our country, when the progressive socialist try and ram down the throats of pro capitalist and pro liberty Americans their socialist agenda.

Teachers in two Michigan education districts today also called off sick to join the protest.
And based on the spelling on their sign here, looks like they could use more education themselves. 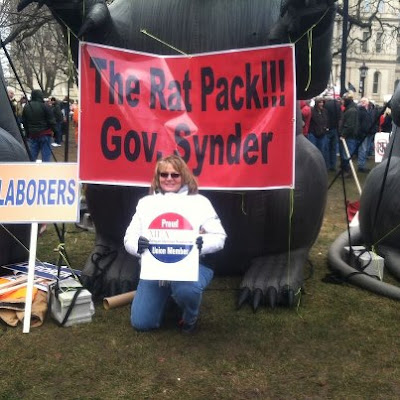 Steven Crowder Attacked during the AFP tent distruction by the union jackasses!!!

Many of those who are protesting are union rent-a-mobs from out of state. I would love to see every governor in the country who has unions do this.

Yeah! Saw a pic of one of their Illinois buses. Would have loved to been there to crack open some union punks head!!!!