A new study by the respected National Bureau of Economic Research has confirmed what the Democrats have been fighting against for the past 4 years.

And that is it WAS, without question, the Community Reinvestment Act and the Clinton amendments to it, was the direct results for the housing bubble and subsequent collapse of our economy, for which I wrote about earlier this year and as far back as April 2010, here. 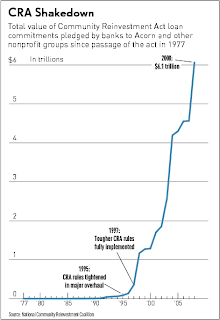 The study concludes that Democrats, for which the media insisted the Community Reinvestment Act had nothing to do with the subprime mortgage crisis, where lying and that the amended CRA was the match that light the fuse of the recession we are still in.


Investors News has brought forth this story, which is quite in depth in it's content.

NBER: "There is a clear pattern of increased defaults for loans made by these banks in quarters around the (CRA) exam. Moreover, the effects are larger for loans made within CRA tracts," or predominantly low-income and minority areas.
To satisfy CRA examiners, "flexible" lending by large banks rose an average 5% and those loans defaulted about 15% more often, the 43-page study found.

Congress passed a law requiring the government-backed agencies to "assist insured depository institutions to meet their obligations under the (CRA)." The goal was to help banks meet lending quotas by buying their CRA loans.

From 2001-2007, Fannie and Freddie bought roughly half of all CRA home loans, most carrying subprime features.

Lenders not subject to the CRA, such as subprime giant Countrywide Financial, still fell under its spell. Regulated by HUD, Countrywide and other lenders agreed to sign contracts with the government supporting such lending under threat of being brought under CRA rules.

"Countrywide can potentially help you meet your CRA goals by offering both whole loan and mortgage-backed securities that are eligible for CRA credit," the lender advertised to banks.
Housing analysts say the CRA is the central thread running through the subprime scandal — from banks and subprime lenders to Fannie and Freddie to even Wall Street firms that took most of the heat for the crisis

While the 1977 law was passed 30 years before the crisis, it underwent a major overhaul just 10 years earlier. Starting in 1995, banks were measured on their use of innovative and flexible" lending standards, which included reduced down payments and credit requirements.
Banks that didn't meet Clinton's tough new numerical lending targets were denied merger plans, among other penalties. CRA shakedown groups like Acorn held hostage the merger plans of banks like Citibank and Washington Mutual until they pledged more loans to credit-poor minorities (see chart).

It's a real shame that this study didn't come out during the 2012 election. But the "Media" wouldn't have covered it anyways, because we live in a 'No information world' when it comes to those ass clowns!
Posted by Unknown at 11:13 AM