Who are the Fat Cats, Americans or Government 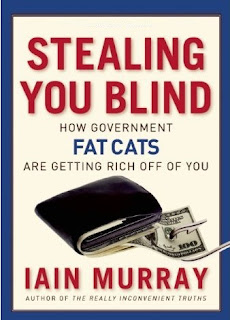 A good argument to wage when referring to the Occupiers, that they are literally targeting the wrong people.
The Democrats are playing class warfare. Pitting Americans against Americans.
Sad.
Stoking the fires of the down and out folks who have reached the end of their rope, they have seised the moment to fan the flames in their quest to bring about radical change to America, and take away our form of economic freedoms, that has created THE most powerful and wealthiest nation on earth (or at least it was).
But the truth lies really within the federal government fat-cat wallets.
Lets take a look.
Federal employees at several financial regulatory agencies - including the new Consumer Financial Protection Bureau (CFPB) - are earning six-figure salaries and taking home bonuses up to $5,000, according to federal records obtained by Judicial Watch.
At least 228 such regulators make $225,000 a year.
In comparison, members of Congress make $174,000 a year; the Speaker of the House makes $223,500; and the majority and minority leaders pull in $193,400 a year.


The records, obtained through the Freedom of Information Act (FOIA), show the number of employees at five of the six major financial regulatory agencies.
In addition to the CFPB, the personnel documents come from Wall Street regulatory agencies including the Commodity Futures Trading Commission (CFTC), the Office of the Comptroller of the Currency (OCC), the Treasury Department, and the Securities and Exchange Commission (SEC).


The forms reveal that hundreds of regulators earn in excess of $225,000 per year, not counting bonus income awarded by some of the agencies.


The documents, known as SF-50 forms, are government employment records that show how much employees earn in annual salary.


These new salary records are bound to cause controversy.  No wonder Washington, D.C.  is the wealthiest area of the country," said Tom Fitton, president of Judicial Watch.  "And the secrecy surrounding basic salary information of public employees shows an arrogance of power and contempt for transparency in an administration that promised the very opposite."


How can you argue with that info, Occupiers?
Posted by Unknown at 8:23 PM