Reports out that Acorn (formally known as) is rapidly destroying or purging their NY office of evidence after a FoxNews.com report shows their heavy involvement in the Occupy Wall Street Protest.


Officials with the revamped ACORN office in New York -- operating as New York Communities for Change -- have fired staff, shredded reams of documents and told workers to blame disgruntled ex-employees for leaking information in an effort to explain away a FoxNews.com report last week on the group’s involvement in Occupy Wall Street protests, according to sources.
NYCC also is installing surveillance cameras and recording devices at its Brooklyn offices, removing or packing away supplies bearing the name ACORN and handing out photos of Fox News staff with a stern warning not to talk to the media, the sources said.
NYCC Executive Director Jon Kest has been calling a series of emergency meetings to discuss last week’s report—and taking extreme measures to identify the sources in their office and to prevent further damage, a source within NYCC told FoxNews.com.


Two staffers were fired after NYCC officials suspected them as the source of the leaks, a source told FoxNews.com. “One was fired the day the story came out, the other was fired on Friday. (NYCC senior staff) told everyone that they were fired because they talked to you,” a source said.


A source said that immediately following publication of the FoxNews.com report staff were called into the Brooklyn office for meetings headed by NYCC’s organizing director, Jonathan Westin. Westin handed out copies of the article and went through it line-by-line, the source said. 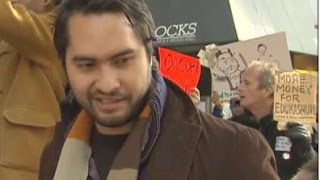 Jonathan Westin
Staffers were also given copies of photos of Senior Fox News Correspondent Eric Shawn and three other Fox News staff members, including this reporter.
“They reminded us that we can get fired, sued, arrested for talking to the press,” the source said. “Then they went through the article point-by-point and said that the allegation that we pay people to protest isn’t true.”

“‘That’s the story that we’re sticking to,’” Westin said, according to the source.
The source said staffers at the meeting contested Westin’s denial:
“It was pretty funny. Jonathan told staff they don’t pay for protesters, but the people in the meeting who work there objected and said, ‘Wait, you pay us to go to the protests every day?’ Then Jonathan said
‘No, but that’s your job,’ and staffers were like, ‘Yeah, our job is to protest,’ and Westin said, ‘No your job is to fight for economic and social justice. We just send you to protest.’
“Staff said, ‘Yes, you pay us to carry signs.’ Then Jonathan says, ‘That’s your job.’ It went on like that back and forth for a while.”
Posted by Unknown at 4:15 PM

It's all good. They've got Obama's "Justice" Department on their side...

Only a retarded con would believe Fuxs News! You and Fuxs News are causing the violence at Occupy! We will take America back!

Hey Occupussy, go for it!
You must be looking forward to your head being bashed in and your lasy ass getting pounded in jail! Loser!

Silver- I think Holders one of them. :)

Occupynothing, Occupy a shower, cause I can smell the stench from here.
The only thing you'll ever take back is the sewers that the rats have taken over. Go tell it to Obama, cause Americans are fed up with the Acorn/Adbusters/Soros trash heap.

Why the threats of violence? Typical tea baggers!

Anon, no threats here, just a warning from AP of things to come once you clowns hit the big time in federal prison.

Anon, you mean the occupy created violence that Occupussy speaks of? There isn't any Tea Party party people out there protesting with you animals. It's just dumb ass fleabaggers and the police keeping your whimp ass in line.