OWS- US Day of Rage

Today is being billed as one of the biggest days in NY, and around the world, for OWS to move from the parks to the streets and call for THEIR march and revolution against capitalism.
This is their two month anniversary, if you didn't know.

According to the Occupy Wall Street website, this thing start at 7:00am (by now it's happening):


Enough of this economy that exploits and divides us. It's time we put an end to Wall Street's reign of terror and begin building an economy that works for all. We will gather in Liberty Square at 7:00 a.m., before the ring of the Trading Floor Bell, to prepare to confront Wall Street with the stories of people on the frontlines of economic injustice. There, before the Stock Exchange, we will exchange stories rather than stocks.

Lets see if it's stories they will share. Or will it get violent, as it has been.

We will start by Occupying Our Blocks! Then throughout the five boroughs, we will gather at 16 central subway hubs and take our own stories to the trains, using the "People's Mic".


At 5 pm, tens of thousands of people will gather at Foley Square (just across from City Hall) in solidarity with -->laborers<-- (aka UNIONS) demanding jobs to rebuild this country's infrastructure and economy.
Afterwards we will march to our bridges. Let's make it as musical a march as possible - bring your songs, your voice, your spirit! Our "Musical" on the bridge will culminate in a festival of light as we mark the two-month anniversary of the #occupy movement, and our commitment to shining light into our broken economic and political system.
Resist austerity. Rebuild the economy. Reclaim our democracy.

Other places around the world that are schedule similar protests are Spain, Belgium and Germany.


Most importantly is their message, below, their campaign poster, notice at the bottom "Brought to you by your anti-capitalism bloc"
Please don't tell me that these people believe in Democracy, for Democracy doesn't work without some form of Capitalism. 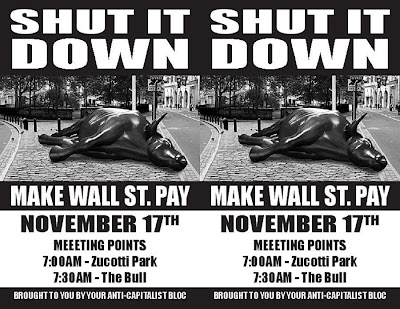 FUCK'EM ALL
Posted by Unknown at 7:30 AM

An "economy that works for all of us?"

I'd love to hear the addle-brained marxists explain how that would work...

An economy that works for lazy asses, is my guess.

Two officer, one slashed, one with eye injury at this thing Silver.
How much more before the NYPD calls in the state law enforcement?