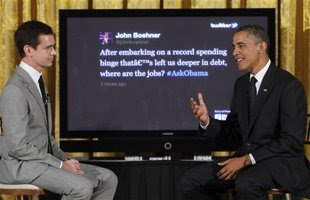 (Charles Dharapak/AP)
During Obama's 'Twitter Townhall' question and answer propaganda event, certain opponents, critical of Obama lack of true openness and leadership ability, jumped in to ask their own question. I guess cause they couldn't get their questions answered in DC.
Republican House Speaker John Boehner posted dozens of questions for Obama on his page.

"After embarking on a record spending binge that left us deeper in debt, where are the jobs?" Boehner asked.

Through a spokesman, the Speaker fired back: "Where are the jobs?' isn't a 'skewed question' to the millions of Americans who lost jobs since President Obama's failed 'stimulus' spending binge began,"

Scores of other Republican members of Congress jumped in for the opportunity to post their own questions.


"Why do you refuse to reform entitlements?" asked Rep. Joe Walsh of Illinois. "They're on an unsustainable path & reform saves them AND cuts debt."

"House Republicans have passed a budget to lift the historic debt and put Hoosiers back to work #askobama about his budget," read Indiana Rep. Marlin Stutzman's

But the most impressive comment came from the US Chamber Of Commerce,   "Will you help businesses and free enterprise create #jobs by getting government out of the way?"

And Paul Ryan was sounding like a Presidential candidate with his, "Fearmongering won't solve our debt crisis. Americans deserve a real debate. You pick: when and where?" Ryan said.


Of course, Obama only responded to questions he thought he could answer.
Posted by Unknown at 7:05 AM

Mark, I was watching and contributing to the twitter feed! I wonder why the liar didn't answer any of my questions???? ha, rhetorical ?

This was such a joke, and he proved himself to be illiterate with social media too, as well as everything else. More lies, insults and crap from the POS in chief....he skewed the WHOLE PURPOSE of twitter, and didn't abide by the rules of 140 characters or less. Much like he doesn't abide by ANY RULE OF LAW or otherwise. Epic fail, and it was funny. Check out Iowahawks blog post and his questions.....funny stuff.

My favorite one "I let my Mexican drug lord license expire. Am I still eligible for the free machine gun program?" LMAO!

I'll have to connect up with you on twitter.

I heard this townhall thing coming for some time, I just couldn’t bring myself to even bother with the POS because I might be sitting in jail right now at the things I want to lambast Obama with. :)

Loved, though, how the GOP jumped in and the USCC comment was brilliant!

His presidency crashed a long time ago...

Yes sir, Silver. And now he wants to crash the USA!