Is this shared sacrifice?

Something that was passed on to me by Adams Patriot sure does make a good  point.

No Cost Of Living Adjustment.. Well look what has happened!
(click on Picture to enlarge) 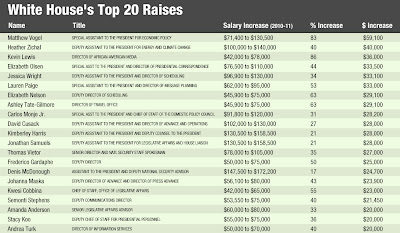 Is this shared sacrifice? Why is no one reporting on this outrage?

Remember: no Cost of Living Adjustment for seniors for two years .
HMMM... 17% to 86% RAISES IN SALARY FOR HIS WHITE HOUSE STAFF MEMBERS !!.  NO WONDER WE CAN'T HAVE A COST OF LIVING INCREASE & HE WANTS TO NOW RAISE OUR TAXES ALSO.  SOUNDS LIKE THE ADMINISTRATION   IS REALLY LOOKING OUT FOR THE VOTERS, DOESN'T IT ????
And Obama's solution to the debt ceiling squabble is to cut seniors paid benefits ( They are not entitlements, we paid for them all our working life and into retirement.) in the form of their SS checks, cover their Medicare or Medicaid payments.   Both parties are responsible, but Obama wants no restraints for his people...this has become personal and always was if truth be known.  Long ago the government began raiding this source of income as their slush fund in times of plenty by not keeping it separate.  Dates back to Lyndon Johnson's administration when these acts were passed into law.
QUIT SPENDING!  STOP THE NEW ENTITLEMENTS TO ILLEGAL IMMIGRANTS, BAILOUTS, PHONY GOVERNMENT JOB CREATIONS, EXCESS FOREIGN AID TO COUNTRIES THAT 'ARE NOT REALLY OUR ALLIES', SS PAYMENTS TO ILLEGALS & DEPENDENTS, AND MOST OF ALL...VERY PHONY FRAUDULENT BY BUSINESS STANDARDS, GRANTS TO RESEARCH 'THINGS THAT DON'T REALLY MEAN SQUAT' TO THE MAJORITY OF LEGAL CITIZENS IN THE UNITED STATES.  THAT'S JUST FOR STARTERS...THEN PASS A LINE ITEM VETO AMENDMENT, DEMAND A BALANCED BUDGET, REVAMP THE TAX CODE SO THAT ' EVERYONE PAYS A SHARE OF THE TAX BURDEN', ( WITHOUT ALL CITIZENS SHARING, IT'S ALWAYS THEM AGAINST US OR WHATEVER LABEL YOU APPLY TO IT)  DELETE PUFFED UP GOVERNMENT STAFF JOBS LIKE THE ONES ATTACHED TO THIS EMAIL.  PLUS - MAKE IT MANDATORY FOR ALL CONGRESSIONAL  MEMBERS (STAFFERS TOO) ALL FEDERAL COURTS, APPELLATE & SUPREME JUDGES TOO, ELECTED REPRESENTATIVES & SENATORS (THEIR STAFFERS ALSO) , CZAR APPOINTMENTS & STAFFS, PRES & V.P. & STAFFS BE SERVED BY THE SAME MEDICAL CARE THE MAJORITY OF THIS NATION IS SUBJECTED TO WITHOUT EXCLUSION.   NO FREE PASSES PELOSI...
NOW THAT WE'VE ESTABLISHED IT ONLY TAKES ABOUT 2 YEARS TO RUIN AN ECONOMY BY  THROWING MORE MONEY AT THE PERCEIVED PROBLEMS RATHER THAN HALT WHAT'S CAUSING THE CRISIS, FIX THE PROBLEM AND STOP HISTORY FROM REPEATING ITSELF.  PUT INTO PLACE MANDATORY TERM LIMITS FOR ALL ELECTED OFFICIALS....THIS COUNTRY CAN NOT STAND 4 MORE YEARS OF THIS TYPE OF LEADERSHIP...PERIOD.
Let's set the record straight.  In 1970 I tried to stop my SS payments to put at least that amount into interest bearing accounts and investments to take care of my own family, not controlled by the government.  I had already seen the government take care of me for almost 2yrs. on active duty with the Navy.  (I was not impressed with how they cared for our well being. )  THE GOVERNMENT DID NOT ALLOW ME TO DO THAT.  I tried and was threatened with incarceration.  So here I am...with the talking heads in DC trying to destroy everything we worked for for 40 years.   Thereby continuing to affect all we've worked to accomplish thus far in our lifetimes.
Posted by Unknown at 11:32 AM

"THIS COUNTRY CAN NOT STAND 4 MORE YEARS OF THIS TYPE OF LEADERSHIP...PERIOD"

Lets change that to the correct terminology shall we:

This country can not stand 4 more years of this type of RECEIVERSHIP,,,PERIOD!

The thing is Obama will keep paying ACORN and screw over grandma and the military if we go into default. This may be his plan all along. The Democrats want to postpone the debt increase till after the next president takes office. It's all politics and they will stop at nothing to get their way.

Looks like they might have a deal, according to Fox News. But I agree, Chris, it's politics as usual, but the House is doing more than the Senate and the President.
The Pentagon as sent an Admiral to Afghanistan to tell troops they might not get paid because of the debt fight.
Turning the military opinion against what the American people want.
If that isn't the biggest cluster of &^%$ from this &^%$ G.D. President, then nothing is.