Sad! So sad that right out of the gate that some Democrats and the left try a politicizes yesterday horrific and tragic events in Tucson Arizona.

From Politico:
One veteran Democratic operative, who blames overheated rhetoric for the shooting, said President Barack Obama should carefully but forcefully do what his predecessor did.


“They need to deftly pin this on the tea partiers,” said the Democrat. “Just like the Clinton White House deftly pinned the Oklahoma City bombing on the militia and anti-government people.”
I would like to know WHO this Democrat is and expose his/her over-reaction as heated rhetoric.
The TPP has come out and strongly denounced what took place.

Another Democratic strategist said the similarity is that Tucson and Oklahoma City both “take place in a climate of bitter and virulent rhetoric against the government and Democrats.”
This Democrat said that the time had come to insist that Republicans stand up when, for example, a figure such as Fox News commentator Glenn Beck says something incendiary.
So, before ANY evidence is brought forth, the left and someone identifying themselves as a Democrat, accuses the indirect responsibility on those who evoke an opinion, or report their discovery through investigative journalism, that some how the rhetoric caused Jared Loughner to commit this crime.
WTF!
Read on

Not long after the shooting, at about 10:10 a.m. in Arizona, some took to Twitter to note that Sarah Palin had targeted Gifford in symbolic crosshairs 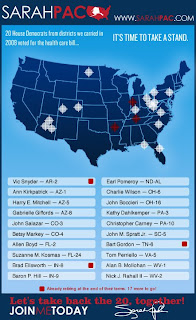 Now, to even suggest such a thing, or put an idea in to some ones head, as some of the left did yesterday, is totally irresponsible unto itself.
Talk about over heated rhetoric.
Complete BS!!!

“Today we have seen the results” of “irresponsible and dangerous rhetoric,” former Democratic senator and presidential candidate Gary Hart wrote on Huffington Post.
Proof of the attempt to point the crosshairs at political debate over the internet shows Hart has had a knee jerk reaction with nothing to back it up, but more political banter.

WE JUST DON'T KNOW JARON POLITICS AT THIS POINT!
BUT, just a reminder of what Claire McCaskill's said just a few, short, months ago....


AND THE PRESIDENTS COMMENTS:


** Obama: “They Bring a Knife…We Bring a Gun”
** Obama to His Followers: “Get in Their Faces!”
** Obama on ACORN Mobs: “I don’t want to quell anger. I think people are right to be angry! I’m angry!”
** Obama to His Mercenary Army: “Hit Back Twice As Hard”
** Obama on the private sector: “We talk to these folks… so I know whose ass to kick.“
** Obama to voters: Republican victory would mean “hand to hand combat”
** Obama to lib supporters: “It’s time to Fight for it.”
** Obama to Latino supporters: “Punish your enemies.”
** Obama to democrats: “I’m itching for a fight.”
SPEAKS FOR ITSELF!!!
Posted by Unknown at 2:19 PM

The left-wing and some Democrats are going a little overboard on this. I never would have thought that the left would act out the way they have. I'm starting to think things might be worse then I thought. This kind of reaction from the liberal blogs is sickening. And the posts that I've gotten on my own blog are out of control. Because of this the left-wing will come for the second amendment and free speach. This may be the crisis the left have been waiting for to take even more control over us. This isn't good.

"Because of this the left-wing will come for the second amendment and free speech."
I totally agree, Chris. With in a few more days they will be attacking the 2nd amendment and not realize is not guns that kill people, it's sick people who kill people for no reason.
I can tell you if they do attack the 2nd and free speech, there could very well be more of this senseless acts by ANY one.

Here is a comment from the Dteroit News blog:
http://apps.detnews.com/apps/blogs/nolanfinleyblog/index.php?blogid=1393

The left is wrong to try to "attack any one group" for rhetoric that's been shared by all over the past 20 some years.

While i do feel that this last elections cycle was the worst its not just the TEA PARTY!

What president should do is be a unifier, not a divider. He should reach out to all and ask everyone to tone down there attacks. He should remind them we all are Americans and that this type of violence and anger will destroy our way of life.


I would hope that the right would ride the storm out and stick to handling their business without pushing back. Now is the time to take the high road. Don't worry about the accusations stay on track with thoughtful discussion of the issues and let America see you as the rational ones.

I don't believe that rhetoric causes violence as much as it does create dialogue. I think Joe is right that this could be a defining moment for Obama. I don't think Obama should talk about the rhetoric because that sounds like limiting free speech, even if that's not what he might mean. The discourse will take it's course and cool minds are needed. We not only need to hear how Obama deals with this but also what he does. I wouldn't put it past Homeland Sec to look even harder for some right-wingers wackos to prove their point. We have seen them brush off the left-wing every time even with video so nothing would suprise me. I would expect that the right would not lash out since that has been our MO all along. We have been lashed out at since Bush got into office. I do appreciate the way Joe stood up to the liberals on my blog. Joe has been the only liberal that has kept his head streight. But we do need to look at what is driving these liberals to act the way they always do. And we must not let that liberal get away with this by just laying down and saying nothing. Don't they realize how much credability they lose when they do things like this all the time?

Could it possibly be that Sheriff Dupnik knew about the college complaints about the shooter and did nothing about it?

Could it be that Sheriff Dupnik didn't send a security detail to the shopping center prior to the start of the rally?

If the rehtoric was so bad as Sheriff Dupnik claims, then why didn't he take steps to protect Gifford?