9/11 families-Pelosi has lost her mind 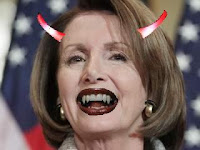 Pelosi has lost her mind... but we already knew that.
I totally agree, she's lost her mind, but I guess she made (once again) clarification. YEA, right!
From FOX Nation:

On Wednesday Pelosi became the latest politician embroiled in the ground zero mosque controversy with what can only be regarded as eye-popping remarks.
“There is no question that there is a concerted effort to make this a political issue by some and I join those who have called for looking into how is this opposition to the mosque being funded,” Pelosi said.
Families of the 9/11 tragedy immediately jumped all over the top House Democrat.

“I think it’s outrageous. She’s investigating 9/11 families whose sons were murdered on 9/11 rather than look at foreign entities that sponsor terrorism? I think she has her priorities mixed up and she’s lost her mind,” said Jim Riches, a former firefighter who lost his son in the World Trade Center attacks.
“They can look into all our funding. We’re regular families, regular citizens, like people who protested in 1776. We’re ordinary citizens and she’s coming out against us because we disagree with her.”
Actually, a lot of people disagree with building a mosque at ground zero.
A new Siena poll found that 63 percent of New Yorkers don’t want the mosque built near ground zero. Only 27 percent support it.

She is evil. The end is near.

The real 'Madam' in Washington DeCeased wants to investigate law-abiding citizens who oppose the Ground Zero mosque!
This is Pelosi's way to muddy the waters and draw attention away from her Marxist comrades with their criminal bent.
What she really wants to divert attention away from is the literal sex brothel she's sworn to protect and defend in her San Francisco district!
Think I'm kidding? Just Google "Madam Nancy Pelosi's brothel district" which is in the latest version of "Imam Bloomberg's Sharia Mosque."
Nancy reminds me of an Egyptian travel poster: SEE NILE!

A Kansas Patriot (who won FIRST PLACE in a nationwide Americanism Essay Contest !)

LOL Anon, she is without question See Nile. I'll have to look up that brothel story... for a good laugh

God Help Us... the end is near, the end of Nancy's speakership, now we need to work on the Senate thing and things will get better, not perfect, but better.