Just What Does Obama Believe In 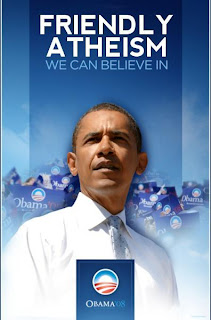 Today on NBC News, Brian Williams asked the President about recent polls that show more and more Americans believe he was born outside of the country, Obama had this to say,
" I can't spend all my time with my birth certificate plastered on my forehead, I have more important work to do than to engage in the back and forth of the political “silly season.”
Doesn't refute, doesn't dismiss it with facts, doesn't say he has spent hundreds of thousands of dollar keeping it out of the public eyes but just dodges the question...
Then was asked about the Restore Honor Rally at the Lincoln Memorial, President Obama said
"It’s not surprising that somebody like a Mr. Beck is able to stir up a certain portion of the country. That's been true throughout our history. What I’m focused on is making sure that the decisions we’re making now are going to be not good for the nightly news, not good even necessarily  for the next election."
WHOA, decisions to make are not going to be good for the nightly news nor the election?
And Beck is able to stir up certain portions of the country? You mean the 178M citizens in our country who have faith in a higher being?
Maybe Obama isn't a Muslim, nor a Christian, looks more like an atheist to me. And of course, says nothing about Dr Kings message 47 years earlier on the very same peice of land.
To me, he doesn't give a crap about Kings legacy, either.
Posted by Unknown at 7:55 PM

In Russia government make media say what they want - even if lie.

In USA "mainstream media" try make government what they want - even if lie..

Old Russian saying You can tell same lie 1000 time but not change truth!

I contend he is a pagan in that he worships himself.

Yes this is also narcissism but also deemed heresy in most if not all religions across the globe including islam if you call that a religion.

Thanks for commenting on mine on this subject Mark and everyone states the same thing today...why didn't he just whip it out there?

Mine has spent time in my wallet through my days like when drivers license yanked for tickets or so on...why not his? lol...he could end it and doesn't ..why?

Because he must not be able to.

Funny too he disparages Becks ability to play Messiah for a day [which I actually enjoyed] and his only claim to anything was his revival meetings they had in the "Summer of hope and change" (when the weed and blow was better than ever and had them all out of their minds.)

This morning on The Today Show with Matt Looser He had on (Reverend???)Al Sharpdum and Been Jealous to discuss the Beck Rally. Here is a link to the vid clip:
http://www.bing.com/videos/watch/video/nbc-today-show-civil-rights-leaders-react-to-beck-rally/1168edbac0babd842ef91168edbac0babd842ef9-241449238534?q=today%20show&FROM=LKVR5&GT1=LKVR5&FORM=LKVR12

Basically, Looser tried to insinuate a racist motive behind the rally. In addition, they showed clips of the rally but did not show or make any mention of Dr. Alveda King's speech or of her even being there.

It's just incredible the racist spin these guys put on for their liberal audience.

The left has hijacked the minorities of America for their own greedy political power. In their minds, the rest of America are bigots if you oppose them.

It is the left that are bigots as they step all over the memory of Dr. Martin Luther King. He would not stand for this and he never stood for this.

This rally was about bringing back god into our lives, spiritual awareness, common decency, restoring America to it's once great sprituality.

The atheiest left, including Al Sharpton, want to trash that spiritual restoration for their own pot of greed!

Good Point, Christopher, he sure can be construed to be a pagan, he does worship himself.. by all the vacations he takes. :))

That is what has peeked my curiosity, Ray. I mean if he wants to put an end to this “silly season.”, why won't he produce it?
Very odd, what does he have to hind... but what appears to be the obvious.
To get my Drivers License in IL I had to show my BC (long form) which I have in my files.

And speaking of "Summer of hope and change"... by all accounts, he holds to high esteem, Bill Ayers, but Obama never really live the 'Summer of Love' with the radical hippies, like Ayers did. Hell, I wasn't even old enough for that. So Obama, you can say, is a hippy want-a-be. :))

And what was that comment that Matt Looser said "Here was have 10's of 1000's of white Conservatives...."
NYT and Matt Looser need to watch this.
http://www.youtube.com/watch?v=7CY5aFvRe2E&feature=player_embedded
Near the middle of the clip, you'll see 'white conservatives'.... NOT!
F**K the MSM BS in this country. Pathetic!

Thanks for the Vid Mark, there is a lot of 'Praise' Vids out there. Yet if you do a search on the net a lot of bigot left wing lies come up, what 'A' holes!

ADAMS PATRIOT, did you catch "legitimate civil rights leaders, Union leaders, secretary of Education,... the day belongs to what Dr King was about"... Well he did NOT see this thing, obviously because it was about what "Dr King was about" Sharpton is just pissed off that Beck totally except Kings Massage, but I guess according to Sharpton, Kings message was only for black people and those on the left.
This guy doesn't know jack-shit about Kings message or he flat out forgot the message.
What a tool! King, I believe would out right dismiss Sharpton current attitude.

Yes, mark this rally was about what Dr. King was about minus the SOCIAL JUSTICE and other non-conservative ideas that he preached and spoke about.

Nice try to continue to co-opt Dr. King but I don't think you've read any of Kings works or words.

Joe, you must be confussing Dr Martin Luther King with Correta King.

King's main legacy was to secure progress on CIVIL and HUMAN rights in the US, which has enabled more Americans to reach their potential. He is frequently referenced as a human rights icon today.
And I have read Kings works, and lived it in those days and learned what he preached as a young man.

Mark, anything you lived and studied is filtered through a heavy rightwing jaundice so its not surprising that you don't understand the mans work or his philosophy. It shows in everything you post.

Mark, joe is under the influence of illusions and demonic trickery.
He has no reality of truth, poor guy, his fever is much too high.

Joe, until you have stood my shoes, your liberal spew is meaningless. You know NOTHING of where I have been, or what I have seen, nor experienced in MY life. Until then, you can sit there and GUESS to your heart desire... But it will all be lies.
Little hint, I once was on the left side of political spectrum, until I woke up many years ago and got wise.
But Kings message still resonates with me.
Can't say the same for you, who took a wrong turn in your life.
What is it Joe? You use to be a conservative. Did the union f*ck with your mind and mess you up, or what?

Yeah David, he's stuck in a rut of liberal muck and just spins his wheels... going no where.