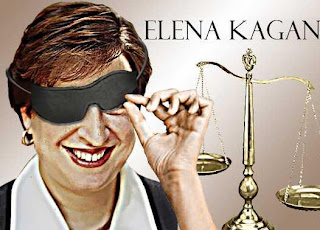 First there was Barack ‘insane’ Obama, with less than a term at the Federal level, he coerced the American public to elevate him to the highest office in the land.

And his first 18 months have proven to America…. He wasn’t ready for the job.

Now we have Elena Kagan who has been PLACED to the highest court in the land.

Here is Elena Kagan resume’
*- Doesn’t qualify her for sitting on a judicial bench,

*Kagan attended Princeton University, where she earned an A.B. in history and her main subject was the studies in the socialist movement in New York City in the early 20th century and wrote a senior thesis under historian Sean Wilentz titled "To the Final Conflict: Socialism in New York City, 1900-1933".
* As an undergraduate, Kagan also served as editorial chair of the Daily Princetonian

* Worcester College, Oxford University. She earned a master of philosophy at Oxford in 1983

-Career-
*Law clerk for Judge Abner Mikva of the United States Court of Appeals for the District of Columbia Circuit in 1987 and for Justice Thurgood Marshall of the U.S. Supreme Court in 1988

*She later entered private practice as an associate at the Washington, D.C., law firm of Williams & Connolly.

*Kagan served as President Bill Clinton's Associate White House Counsel and Deputy Assistant to the President for Domestic Policy. In a 1996 White House document, Kagan grouped the National Rifle Association together with the Ku Klux Klan as "bad guy" organizations.
*In 1996 she wrote an article in the University of Chicago Law Review entitled, “Private Speech, Public Purpose: The Role of Governmental Motive in First Amendment Doctrine.” Kagan argued that government has the right, even considering the First Amendment, to restrict free speech, when the government believes the speech is "harmful", as long as the restriction is done with good intentions.

*Kagan then took a position as a visiting professor at Harvard Law School.

*In 2001, she was named a full professor and in 2003 was the first woman to be named Dean of Harvard Law School

* United States Solicitor General-On January 5, 2009, President-elect Barack Obama announced he would nominate Kagan to be Solicitor General Before this appointment she had limited courtroom experience. She had never argued a case at trial, and had not argued before the Supreme Court of the United States.

This Ladies and Gentleman is her experience in an actual court room, NONE!
And Yet, she will sit on the highest Court in the land!!!

This Ladies and Gentlemen will be the fourth woman to serve on the high court after she is sworn in, won the job on a Senate vote of 63-37 (Republicans who voted for her- Sen. Lindsey Graham, R-S.C, Richard Lugar of Indiana, Olympia Snowe and Susan Collins of Maine, and Judd Gregg of New Hampshire.)

The first with no court room experience whatsoever.

One more thing… She has never passed the bar.
Posted by Unknown at 5:52 PM

And the Republicans wont do anything about her. This women doesn't belong on the SC.

She's a highly accomplished woman just in all the disciplines that advocate the destruction of the country in favor of Social Justice from sea to oily sea for the 'disadvantaged'.

The R's who signed on to this better plan retirement. Brown voted against but these RINO knuckleheads voted yea:

The day of reckoning is at hand, we must not fail as that is not an option.

Yeah Ray, she's accomplished woman alright, mostly in authoring. I mean look at that resume' editorial chair, supervisory editor, wrote an article in the University of Chicago Law Review. On top of Law clerk, an associate, assistant professor, visiting professor, full professor, Dean and then somehow gets appointed as United States Solicitor General.
Those with the R helped place her on the highest court in the land obviously didn't vet this person very well. As most everyone who voted for Obama.
-Christopher We sure should not fail, however she is on the court as long as she wants.
-Chris, I don't think I have ever been as pissed off with those Repubs as I am right now.
They F'ed up, big time!

She will prove just how qualified she is...just be patient.

She will prove that she is two things
1) An 'activist' judge, and
2) a liar, (as most liberals are) for pledging not to rule from personal opinions.

Just what in the hell is wrong with the Repubs for voting this 'most unqualified' individual in is beyond reasonable sanity.

I can see the left loosing the House and perhaps the Senate, but with lifetime 'activist' appointments like this the House and Senate will be rendered worthless.

In lifetime appointments like this one, I can only presume that activism on the bench could lead to removal by activism, out in the street!

My gut feeling why those RINO's did this is they feel that it won't tilt the balance of the court, which would be true. However we could lose one that leans right during the Obamanation administration. And that would tilt it left for, perhaps, a decade and a half.
Then we will feel the effects of this Socialist-in-chief for quite some time... leaving that kind of country to our children.
I for one will not leave to my children THAT kind of country, PERIOD!

Ah Mark, I believe Justice Kennedy? (Bush 41 appointee) was quoted as saying he now has NO intention of retiring before the end of Husseins 1st (and only) term in office.

It is true that he has not turned out to be reliable when it comes to the Constitution but by his words he see's the writing on the wall and is not pleased by Kagan.