Obama's Lawyer- 'Yes it Was Forged' 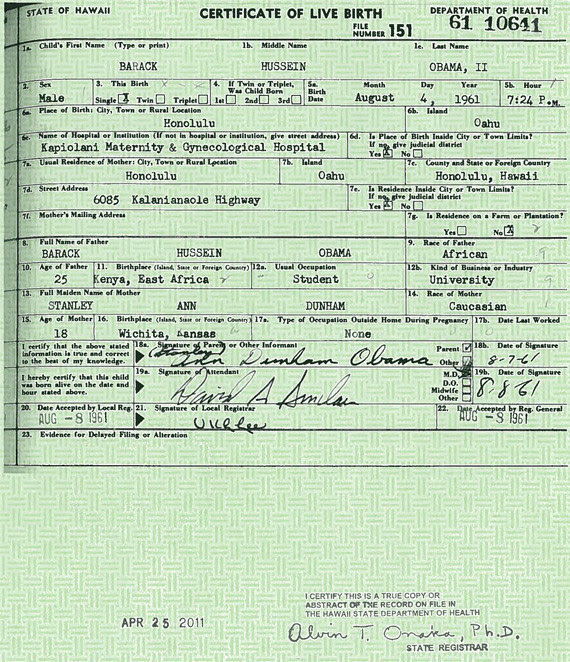 And, yes most people will admit, maybe not openly, though, that the PDF that Obama presented to the world as his birth certificate was indeed forged.
So says his lawyer to a New Jersey judge.
Tea Party Tribune has this story.
A recent ballot challenge hearing in New Jersey exposes a desperate strategy by Obama to distance himself from his forged certificate and induce the contrived value of his transient political popularity as the only “legitimate qualification” needed to hold the office of the presidency.
Obama’s lawyer, Alexandra Hill, admitted that the image of Obama’s birth certificate was a forgery.
She continues:

therefore, it cannot be used as evidence to confirm his lack of natural born citizenship status. Therefore, she argued, it is “irrelevant to his placement on the ballot”.

And probably the most insane thing this lawyer said was:

Obama needs only invoke his political popularity, not legal qualifications, in order to be a candidate.

As Obama’s legal argument becomes more contorted, he is being forced to avoid an ever shrinking legal space, and an increasing weight, of his failure to meet constitutional eligibility requirements.
Hill, of Genova, Burn & Giantomasi Attorneys in Newark, made a desperate motion to dismiss the ballot objection arguing that Obama’s lack of natural-born citizenship status was not relevant to being placed on the New Jersey presidential ballot because no law exists in New Jersey which says that a candidate’s appearance on the ballot must be supported by evidence of natural born citizenship status.
Judge Masin denied the motion to dismiss and the case proceeded to trial.


More can be read here. But it is an interesting development, to say the least.
Posted by Unknown at 8:28 PM

This is beyond interesting and had better be picked up on Fox News at a minimum. Once there the others, no matter what the WH wishes, will have to at least mention it as people will be asking to hear their take.

Word out, Christopher the the execs at Fox have instructed their news dept to avoid reporting anything about the BC.
What really makes this thing even more interesting is, his lawyer said it was, she could only reveal this because she was privy to this knowledge, by her client.
So therefore, Obama knew when he held the news conference, that what he held in his hands was a LIE.

As a conspiracy theorist, nothing Obama does surprises me - he's the slickest liar I've ever and he knows no shame.

Usually they try to hide it, Firebird, but this is right out in the open.
I wouldn't call yourself a 'conspiracy theorist' more like a 'concerned Patriot'.

I'm concerned to the point that my family will probably be putting me in a rubber room before November 6!

(and p.s. - thanks for the technical info - i think it's working now)

Hang in there, Firebird. Need your vote to get O'blame'o out of office.

Glad my advice work. You're welcome.