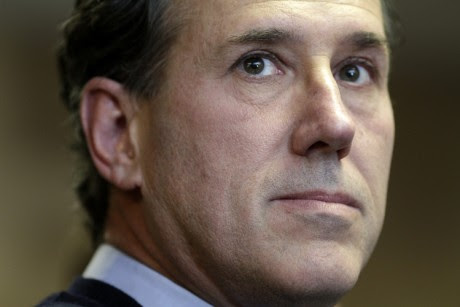 In a press conference just a few minutes ago, Presidential Candidate, Rick Santorum has called it quites.

During his press conference he referred to his youngest daughter, Bella, who has been hospitalized twice since he started his campaign, is the real reason he and his family have made this decision.

These leaves only 3 in the race. Romney, Gingrich and Paul, to take on Obama on Nov.

Gingrich is expected to eventually drop out, even though he vows to continue on to Tampa for the RNC convention.
Paul is not expected to make any in roads to the nomination.

Looks as if Romney will be the nominee. A Moderate that, at least at this point, can't get most Conservatives behind him... So Romney better pick a great conservative VP running mate.

I wouldn't say Newt was unfocused, at least not on this issues. Mitt took him of subject when his super PAC attacked him.
In a sense I am glad Santorum bowed out. His ill child needs him more than the nation does, at this point.