Last Thursday I was prepared to post this piece of the Sanford Police dept security video showing Zimmermans being brought in for questioning and how ABC was being elusive with regards to Zimmermans injuries on his head, which they said wasn't there.
The reason I held back was because of the one part of the video that I captured showing some kind of injury to the crown of his head. But because the video and picture capture was not clear enough to be definitive proof he had an injury there, I choose to let it go.


I should have gone with my first instinct.
ABC, now has taken this footage and had it compressed to make it more clearer of the crown of Zimmermans head, which now shows there was injury to his head.
Here is what I was to post.


ABC News has obtained exclusive video footage of George Zimmerman being brought in to the Sanford Police Dept for questioning. And based on their "exclusive" video footage piece, ABC News is making the claim that there are "no abrasions or blood can be seen in the video"
"The initial police report noted that Zimmerman was bleeding from the back of the head", as reported.


ABC News also says Crump (The Lawyer for Martins parent) alleged that the Sanford police had leaked damaging information about Martin in order to muddy the case, calling it a "conspiracy."


Now this post is not intended to prove Zimmermans guilt or innocence here. None what-so-ever, NO.


This post is to show one thing, and one thing only.
ABC News is trying to create their OWN conspiracy, in my opinion, as I will show in three different points of interest, here, as I see it.


First, in the video below, ABC's "Exclusive" banner covers Zimmermans crown of his skull for 44 seconds of this 1:28 minute footage, as Zimmerman is closest to the security camera.


Second, at the 0:41 mark of the video, an officer is seen pausing for approximately 4 seconds to look at the back of Zimmerman's head. What is he looking at?


And lastly, but most important of all, comes at the 1:06 mark of the video, where there is a clear shot of the crown of Zimmermans head, where there appears to be a 2" to 3" laceration.
I have included a frame capture close up (see below) at the 1:07 mark where it shows this laceration.
That's what the officer was looking at! 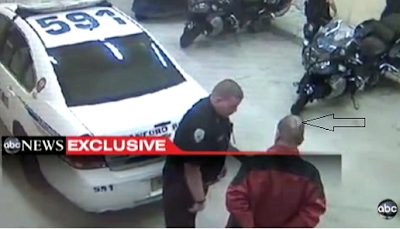 Why is ABC News making such claims, when it is clear that there is a wound on top of Zimmermans head, when they say there are none???

Now the enhanced video and screen capture, that is much more clearer to back up this post. 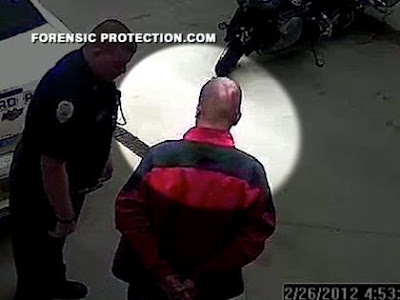 Based on the Limbaugh standard, everyone should boycott ABC and NBC (doctored 911 recording) and their advertisers. This is blatant lying and stoking racial tensions.

They are dangerously irresponsible and the FCC should fine them.

When the free press becomes a propaganda vehicle for a select ideological side in the government and causes harm to the citizenry, fascism has proven to taking hold of America!

I agree with both Silver and AP.

But on Silvers point of the FCC who is controlled by Obama fining the MSM who is schilling for controlled by the same, well that is simply not going to occur.

It sure is stoking the fire of racial tension. And if this escalates to violence on the streets, NBC and ABC should be held liable for it. It's a dangerous precedence to set, for political reasons and I agree, Kurt the FCC needs to lay the hammer down on ANY station for their mis-representing or deliberate deceitfulness.

AP and Christopher make another good point. Propaganda and who reports to whom in the FCC.
Obama would have the last word on that, I would say.

Just like broadcasters have to declare their call letters at the top of each hour, news programs should have to frequently admit that are lackeys for the left. I have no problem with them BEING lackeys, but let's just be honest about it.

it wasn't until I was watching this video that I noticed how much Zimmerman resembles a black man than a white man!

And after all the scamming by ABC and NBC, I now wonder if his mug shot has been brightened to make him appear MORE WHITE than he really is!

Take a closer look at this video again!

"news programs should have to frequently admit that are lackeys for the left."
Jim, lets take the Whitehouse and the Senate and THAT could become a reality.

Thats the first thing I notice when they came out with the "mugshot", AP, that the white balance is a bit bright on the picture.

I watched CNN Situation Room last night, purely out of curiosity on their reporting of the Zimmerman/Martin issue.

Earlier, while in a restaurant, they flash on screen that Tyler Perry has been racially profiled by police, so I thought I would tune in to see what other racially inflammatory stuff they were showing.

They took parts of the 911 tape that could not be made out what was said and enhanced the audio.

Then insinuated that it was a racial slur that was said. After they told you what he was saying and putting the idea in your head that the words were "fu@king Coon" they played it over and over and over until you 'think' that that is what was being said.

However you still can't make it out.

This scum from CNN then looked at one another and smiled as though they uncovered something remarkable that confirmed the Zimmerman was racist.

And yet it was all just suggestive, you could not understand the words.

CNN, ABC, NBC, and MSNBC is only reporting one side, only making Zimmerman out to be something from suggestion of design, without solid evidence.

Should we have a race war in America and should Zimmerman be killed, these organizations and Obama will be directly responsible for it.

AP, thats some pretty scary stuff, there. This is like the Third Reich here.
To suggest, to the audience, what you will hear before you hear it, is quite suggestive, and quite unprofessional as "journalist".
I am going to see if I can locate this piece from CNN.
Thanks!